Vettel thought he was being brake checked, he retaliated by swerving into him under caution – Scuderia Ferrari vs Mercedes AMG

Watch the Vettel vs Hamilton video below.

This weekend at Baku city, all hell broke loose in the F1 race. The early part of the race was plagued with contact. Debris scattered the track, thus a safety car was deployed.

Many drivers were complaining that the safety car was driving too slow. In fact, it was driving 20 seconds per lap under the delta of the virtual safety car. In F1, heat in the tires and heat in the brakes is beyond important. If a specific level of heat isn’t applied to both, they essentially won’t work.

The slow safety car forced aggressive stops and starts from, leader, Lewis Hamilton. He was attempting to put heat into his brakes and tires, moments before the restart. 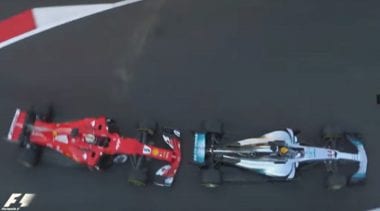 As Lewis Hamilton was doing this, Sebastian Vettel ran into the back of him. An pure accident at this point, on both sides of the situation.

Then, in a moment of blind rage after what just occurred, Vettel pulled from 2nd and along side the leader. Still under caution, he raised up his hand then swerved into the leading car, wheel to wheel contact in a F1 car, under caution.

More on-track debris was created. The race was then red flagged, too much debris on track. Crew workers went to cleaning up.

After the race, Mercedes AMG Petronas driver Lewis Hamilton spoke on slow pace of the safety car, “It was really difficult. I don’t know why the safety car driver was not driving flat out. Which is a bit strange.”

He continued, “It just puts us a little bit more in harms way. We already struggle with these tires. The FIA have asked for these kind of tires. We’ve said that they don’t work and they struggle to work at those temperatures. If you see a safety car and people a shunting. Then, you see another one. Surely you should learn from those experiences.”

Lewis said the issued could have been avoided without the safety car on track, “Especially when there’s not a car stopped on track [damaged car]. To avoid those issues it should have just been VSC [Virtual safety car].

Lewis spoke on the incident with Vettel. Was a 10 second penalty for “dangerous driving” enough? Lewis, “It definitely sets a precedent. It sets a precedent not only in F1 but for all the young kids that are watching. As F1 drivers drive and conduct ourselves, they’ve seen today how a 4 time world champion behaves. Hopefully that doesn’t ripple into the younger categories.”

“In terms of how things are penalized… I don’t know how you can do something like that and still finish 4th. I don’t know. I’ve not really thought too much about it.”

Lewis was asked if the actions by Vettel change they way he battles him on track in the future, “Uh, [Long pause…]. I don’t know. I got to think about it.” 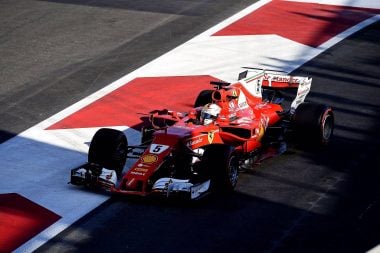 Post-race, the Ferrari driver explains, “The leader dictates the pace. But we were exiting the corner, he was accelerating and then he braked so much that I couldn’t… I was braking so much, that I couldn’t stop it time. So I ran into the back of him. So, that is not necessary.”

A big talking point of the incident is that kids are watching. Future racers who might think it’s ok. Vettel: “Well, I think F1 is for grown ups. As I said, the moment before damaged my front wing and damaged also his rear, I think a little bit.”

Will Buxton asked Sebastian Vettel at least four-five different times if the side retaliation contact was deliberate. Sebastian Vettel dodged the questions all four-five times even asking, “What? When I ran into the back of him?”

Sebastian Vettel described the moment like this, “I drove along side, we had a little contact. I drove alongside to raise my hand. I didn’t even give him the finger or anything. I just wanted to talk to him. I can’t literally talk to him.”

We all know it was, of course. I understand why the Scuderia Ferrari driver won’t admit to it. Swerving into another car, under caution, yet mid-race, isn’t something I’ve ever seen in F1. If Vettel would admit to something like that, who knows what kind of penalty he might receive. I think Seb want to own up to it, but it’s just a smart move, not to do so.

“Well, yeah he brake checked me as well. So what do you expect? In the end, I don’t agree with the penalty I got. Because, if you penalize me, then you should penalize both of us.”

He continued, “I’m sure he didn’t do it on purpose but for sure it was not the right move. There was something similar in China a few years ago.”

Mid-race, Vettel was assessed a 10 second stop and go penalty for “causing a collision.” Lewis Hamilton had a part malfunction, at the same time. If it wasn’t for the retaliation contact, Vettel would have won this race, instead he finished 4th after serving the penalty.