The track is bad fast. A 3/8 mile dirt track near the riverbanks of the Ohio River. 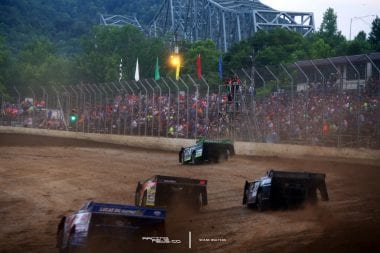 Heat 1
Green flag on heat 1. Josh Richards drives out to an early lead. Steve Francis and Gregg Satterlee trail. Josh holds the gap. Caution, late. Richards will have to do it all over. He does. Richards wins heat 1. 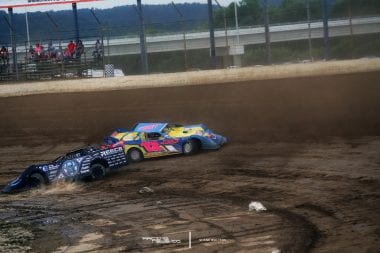 The next time in turn 1 the Bloomquist machine stalls completely. Shannon Thorsberry has nowhere to go, he gets into the back of Bloomquist. Caution. This same thing happened to Bloomquist at Magnolia.

Green. Owens is up to 2nd. Lanigan forces his way under Boggs. Down the back straight, Biggs turns left. He runs Lanigan to the infield grass. Spins himself out in the process. Unsure if he lost the car on exit and hard to catch it down the track or not.

Green. Fouts drives to the win in heat 2.

Heat 3
Green. Don O’Neal, RJ Conley and Tim McCreadie battle for the lead in turn 1. RJ pulls a slider, deep into turn 1. O’Neal lifts and dives under him on exit. O’Neal to the lead. 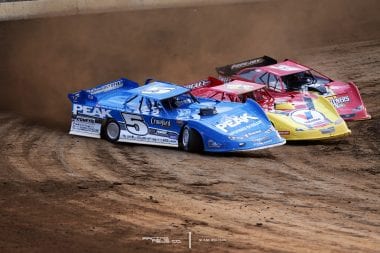 They stack up 3 wide on lap 2 at the entry of turn 1. Don O’Neal holds it on exit. McCreadie falls into 2nd. McCreadie tries to hang with O’Neal. He does but he’s going to come up short. Don O’Neal takes the heat 3 win.

No B-Main tonight. Everyone makes the feature. 60 laps around Portsmouth Raceway Park, in search of $12,000.

The point leader will start from the tail. Scott Bloomquist has pulled out the backup car after his crash in the heat race. 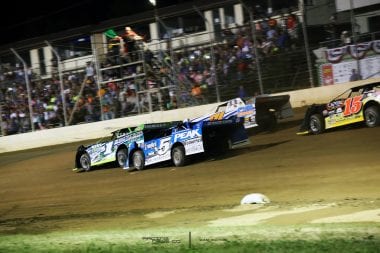 Main Event
Josh Richards and Brandon Fouts lead the field into turn 1. Richards takes the lead out of turn two on the bottom. Lap 2, caution.

Green, Josh Richards checks out. Owens is up to 2nd. He was gifted with an inside row restart. Fouts got stuck on the outside.

Lap 9, Josh Richards is in his own league. He’s nearly caught lapped traffic. Caution, Charlie Jude is slow on track.

Green. Tim McCreadie and Gregg Satterlee are both around Owens. This time Richards doesn’t run away. McCreadie runs right with him as they slice through traffic.

Lap 30, caution. Bloomquist and Hudson O’Neal are slow on track. They both hit the pits. 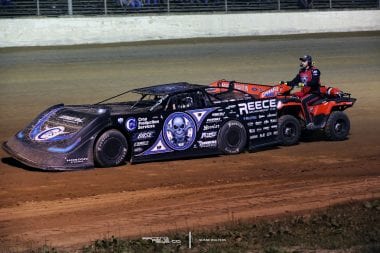 Green. Satterlee is around McCreadie. Caution. The zero is slow on track again. Bloomquist is having fuel and/or ignition issues. He swapped cars already. The backup is doing the same thing as the primary. He parks it.

Green. Richards checks out on the field again. McCreadie is stuck behind Satterlee. The #22 hits a bump in 1-2. McCreadie nearly gets by. He gets him the next lap, McCreadie to 2nd. Caution, Audie Swartz is around. Lap 39.

Green, Josh Richards is running right over the inside tire barriers at Portsmouth. Tim McCreadie is experimenting. The highside isn’t working.

Richards has 5 car lengths on McCreadie with 5 to go. But, he makes quick work of the lappers. Josh Richards moves off his regular line in the closing laps, slices through the lappers.

This is a big night in the points battle. The point leader, Bloomquist had a big gap heading into the night. However, 2nd and 3rd place in points finished 1st and 2nd tonight as Bloomquist parked it on the infield.