The points battle is tight! Josh Richards comes into Tri-City with a 10 point lead over Scott Bloomquist. The #0 has led the standings for the majority of 2017. Recent issues have catapulted Josh Richards to the lead. However, the orange spoiler is very much up for grabs tonight.

Drama. Scott Bloomquist is not in the pit lane. I haven’t confirmed why he’s late exactly. But I’m told he won’t be here until 8. He’ll certainly miss qualifying. Possibly his heat as well. 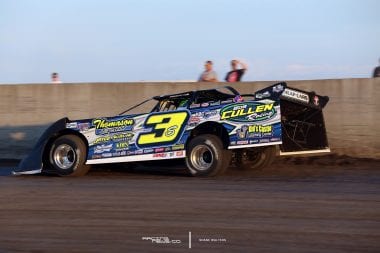 O’Neal slips off turn 4. The bottom lane is open, Lanigan powers around the bottom. Move Lanigan to 2nd.

No pressure for Shirley, the #3 takes the win in heat #1. 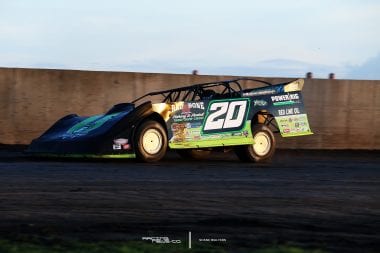 Heat 2
Martin and Tim McCreadie set row 1 in heat 2. Green, Tim McCreadie drives to the outside. Martin slides up and takes his line away on exit. McCreadie is up to his fuel cell on exit.

McCreadie has to check up earlier than he wanted to at the entry of 3. Jimmy Owens saw this coming. He drives to the outside, around McCreadie for 2nd. But he’s not done. To the outside again in 1-2. New leader of two. McCreadie slips by Martin as well.

Caution. Green. Jimmy Owens holds them off. He wins heat #2. 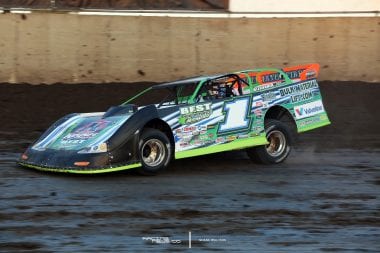 Heat 3
Josh Richards and Billy Moyer Sr lead the field to the green flag. It’s the worlds slowest restart and Billy Moyer is caught by surprise. Moyer was probably 4th at the flag stand. He drives to the outside in turn 1, makes it all back.

They come off turn 2. Richards leads Moyer has fraught his way back to 2nd.

Richards takes the high line and drives it to the win. 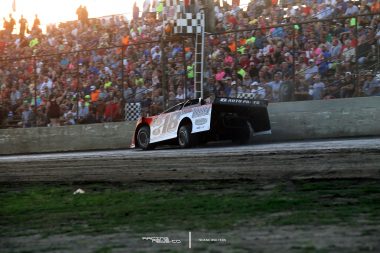 Heat 4
Shannon Babb and Earl Pearson Jr setup the front row. But it’s the last row on the grid that has the attention of the crowd. Scott Bloomquist has showed up to play, he’ll start last.

Green. Shannon Babb drives off instantly. Bloomquist is turning his first laps of the night. He moves up to 5th and stalls progress.

Gregg Satterlee clips the wall with his right rear while running 4th. Just a few sparks, he continues. At the front, Shannon Babb wins the 4th and final heat.

B Main 2
Tony Jackson Jr won B-Main number #2. No provisional needed, Scott Bloomquist finished 2nd. He will start at the tail of the tail of A main. 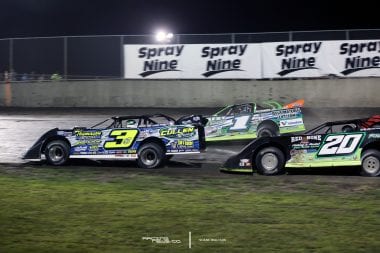 Main Event
Brian Shirley and Josh Richards will lead the field to green. It’s the Battle at the Beach. 50 laps around Tri-City Speedway.

$2,000 in fireworks was scheduled to go off during the 4 wide salute. Unfortunately, the computer that was distended to push the button isn’t operating. A fan knocked the computer off the table, the detonator button is now busted.

Green flag! Brian Shirley leads the field into turn 1. He slips on exit, they swarm, 3 wide for the lead off turn 2. Josh Richards slips by on the outside. Jimmy Owens on the inside. The field splits Shirley. The #3 holds off Owens in turn 3. But the headache isn’t over for Shirley, Babb drives to the outside in turn 3. He clears him on exit. Move Babb to 2nd.

Josh Richards leads. He taking an interesting entry in turn 3. He’s entering against the outside wall, stomping the brakes and driving off low on exit. A really early diamond, high to low. 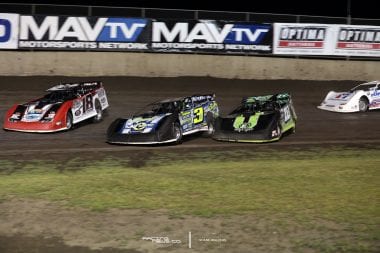 Green flag, Owens gets a run on the restart but he doesn’t have a hole to get through. He makes slight contact with Shirley at the entry of 3, they were both fighting for the bottom.

Josh Richards drives off into the distance.  Babb is beginning to catch him. Caution.

Lap 19, Hudson O’Neal is in the wall. He was near the top 5. He bounces off it and continues rolling. Heavy right side damage though. Still green.

Green, Richards drives away. The race is on for 2nd. Tim McCreadie takes it!

Trouble for Bloomquist. It sounds like his engine is sputtering again. He’s dropping through the field. Shirley is also dropping, he’s barely inside the top 5. 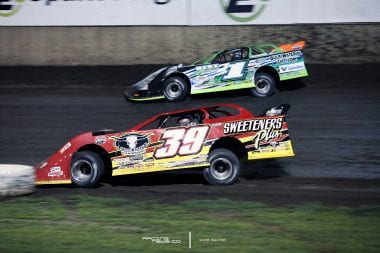 Green, McCreadie drives it hard into turn 1. He pulls even with Richards. Not enough, Richards carries the high side momentum right on by.

Lap 45, caution. Darrell Lanigan has come to a stop.

McCreadie will get another shot. Green, just 5 to go. Same thing in turn 1, Richards hold it.

Josh Richards is going to win at Tri-City Speedway! 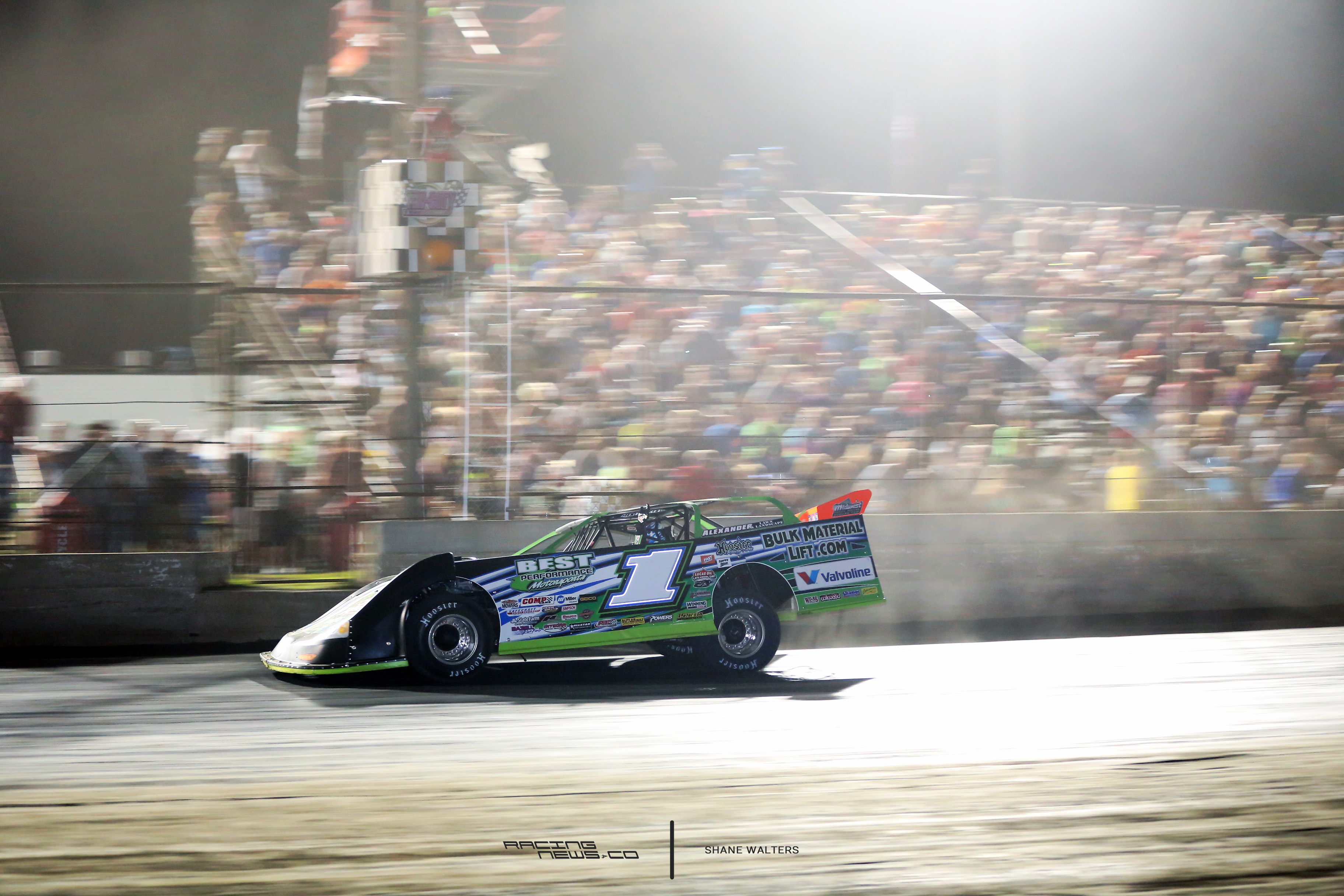