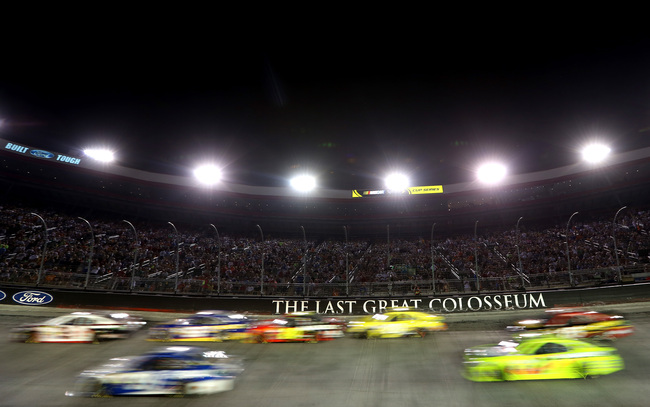 Bristol Motor Speedway the last great colosseum. NASCAR fans fill the seats, 160,000 of them, twice a year to watch an underground boxing match of a race on a high-banked short track hidden within the smoky hills of Bristol, TN.

Drivers dive nose first into turn 1, drag the brake until the car magically rotates at the center of the 30 degree turn. Back into the gas and onto the straightaway. Briefly catching their breath on the short 650 feet straight away only to hold it in and do it all over again in turns 3 and 4. Sinking into the seat, pushing the car right to the edge of the wall at the center of the corner with a car directly ahead and another up your ass. Breath you’re on the straight away again. Now do it 499 more times.

Every lap is a struggle to hold the 800 hp cars in the right direction, it’s right on the edge of control at any given moment. It has to be, teams run high 14 second laps to grab the pole while last place runs in slim .5 seconds behind. The drivers are forced to push to car to the limits or choose to run last. They are not chasing tenths, they are in search of hundredths of a second that will give them an advantage over the 250 mile night race.

Aggression is a requirement to win at Bristol Motor Speedway. If you take a quick look at the all time winners around the half mile. Darrell Waltrip, Kyle Busch, Dale Earnhardt, Cale Yarborough, Rusty Wallace, Kevin Harvick, David Pearson and Jeff Gordon are all really aggressive drivers. Racers who are fast but lack aggression like Kasey Kahne will consistently run second. If you want a win at Bristol you have to take it.

160,000 seats make Bristol Motor Speedway the 8th largest stadium in the world. Why so many people? People will travel long distances to the middle of nowhere Tennessee for the show. Willing to pay high ticket prices for the tingling feeling received as 500 laps wind down quickly to 495 completed, first and second are nose to tail with just a handful of laps to go. Anything could happen during and after the race.

I visited The Last Great Colosseum twice a year for 15 years straight, an 8 hour drive each way. It was worth every mile. Until the track rebuild, I stopped logging those miles in 2008. Still I watch every practice and race lap every year but the new track configuration is no longer worth the drive. I’ve seen the best of Bristol and those days have come and gone. It’s still the best track in the world and I stand strongly behind that statement but it’s just not what it once was.

Fans will always stand and cheer with excitement as a driver wrecks another driver under caution laps. It’s exciting. It’s much like a fight during a hockey game. The game is on pause but fans are still royally entertained. It’s the same concept but these drivers are strapped to race cars and they will use them as a weapon.

Fans like to watch a brawl, not just the physical altercation between fists. While tempers often fly after the race as we saw this weekend with Kevin Harvick, it’s much more then that. Drivers are brawling with their own cars and the drivers in front of them throughout the length of the entire race. A simple rub just to agonize the driver ahead and hopefully drive him to make a mistake, all so you can grab the all desired position that he has over you.

The layout of The Last Great Colosseum gives you multiple options. Dive to the bottom and hope for the best. However, the competitor at the top of the track will impede your progress when you reach the exit of corner side-by-side, preventing you from using up the full lane on the exit of 1 and 4. Frustration kicks in and it’s simply time to go. Use the bumper and put them in the wall as you drive on past. Hopefully, they wont come to a stop and drag you into the wreck with them.

The track has been reconfigured multiple times over the years. Most recently, 2007 when track owner Bruton Smith attempted to destroy the single groove race track idea with multiple degrees of banking in the turns of The Last Great Colosseum. The banking is now increased as you venture further up the tricky race track. Bristol Motor Speedway is now somewhat usable on both the top and bottom but realistically it’s still a single groove racetrack. The track rebuild only moved the preferred lane from the bottom of the track right against the yellow line to the top of the track right against the wall.

I, like most fans, prefer the old Bristol Motor Speedway. It’s still exciting to see drivers run right against the wall but this makes the track bigger and the bump and run nearly impossible. Bump and runs can no longer be applied, if you do it you will put the driver in the wall. When drivers ran the bottom of the track you could bump them and they would generally save it before hitting the wall, only losing a few spots. Now, the bump and run is applied a lot less often because the consequences are much larger.

In the past, drivers would race off the corner and dive under on corner entry to take the position. Sometimes, the driver ahead would attempt to slam the door shut but they were already there and there’s no backing out of it. You will either go around or slide up the track. Regardless of what you think of the old track, passing was easier on the old layout. When you couldn’t do it without contact you could always do it with contact and usually both drivers would continue to race another lap.

Every lap turned would be another lap searching for that driver that gave the bump and run. It’s another level of excitement added to the race within the race at The Last Great Colosseum. You wouldn’t see drivers run side-by-side for 30 laps on the old layout and that’s ok. They were bumper to bumper and eventually you would expect contact. Now, they run side-by-side lap after lap and nobody goes anywhere. The bottom is just too slow.

Other tracks are fast but they lack excitement. Racing is much more than just speed and with the tracks added to the NASCAR tour in the past few years you would think NASCAR disagreed. However, this year a dirt track was added and finally it looks like the series is heading in the correct direction.

I wish Bristol would tear up the whole track and go back to basics. 36 degrees of banking top to bottom. This would force everyone into the same line, bumper to bumber, A slow car would stack up the field, and quickly 10 cars would all be lined up ready to pounce at any moment. It would bring the excitement of the bump and run. That would be racin’ the way it outta be.