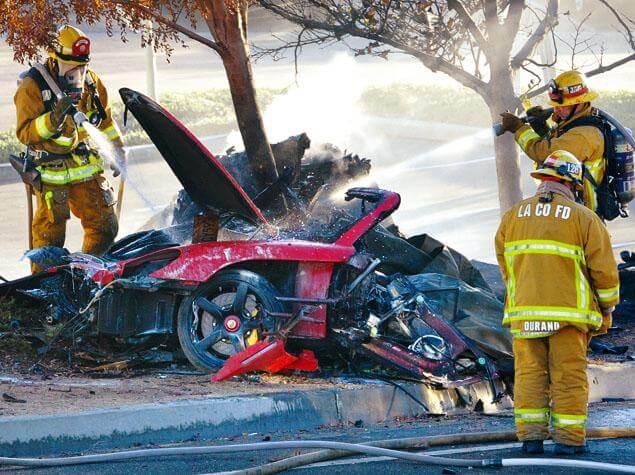 Paul Walker crash kills actor who gained fame as an undercover detective in the hugely successful “The Fast and the Furious” franchise, was killed Saturday in a car accident in Valencia, his representatives confirmed.

The single vehicle crash occurred about 3:30 p.m. in the 28300 block of Rye Canyon Loop. Deputies from the Santa Clarita Valley sheriff’s station and the Los Angeles County Fire Department arrived to find a vehicle engulfed in flames. Two people in the vehicle were pronounced dead at the scene.

The cause of the accident is under investigation, said sheriff’s Deputy Kim Manatt.

According to a statement on his Twitter account, Walker, 40, was attending a charity event to aid Filipino victims of Typhoon Haiyan for his organization Reach Out Worldwide, formed in 2010 as a quick response first-aid organization.

“It is with a truly heavy heart that we must confirm that Paul Walker passed away today in a tragic car accident while attending a charity event for his organization Reach Out Worldwide,” the statement read. “He was a passenger in a friend’s car, in which both lost their lives. We appreciate your patience as we too are stunned and saddened beyond belief by this news.”

Officials with the Los Angeles County coroner’s office said they were still at the scene and could not confirm the names of either victim.

Representatives with Universal Pictures confirmed Walker’s identity and released a statement on the Paul Walker crash :

“All of us at Universal are heartbroken. Paul was truly one of the most beloved and respected members of our studio family for 14 years, and this loss is devastating to us, to everyone involved with the ‘Fast and Furious’ films, and to countless fans. We send our deepest and most sincere condolences to Paul’s family.”

At the time of his death, Walker, who also starred in “Pleasantville” and “Varsity Blues,” was working on the seventh film of the “Fast and Furious” franchise before the Paul Walker crash .