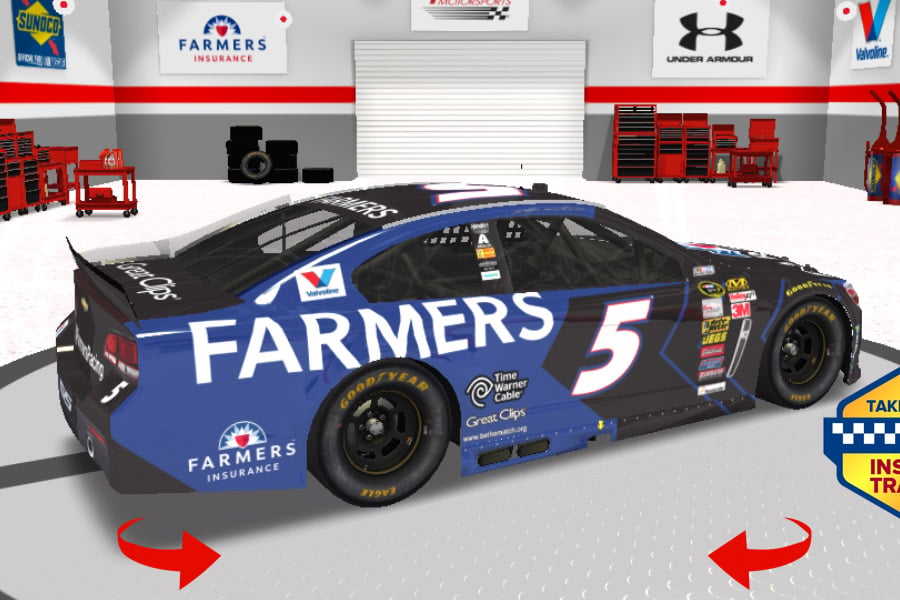 Kasey Kahne 2015 paint scheme has been developed. Make sure you see the NASCAR design photos below of the Hendrick Motorsports car driven by Kasey Kahne in 2015.

In September, fans had the opportunity to Design the 5—voting for key elements of Kasey Kahne’s 2015 car the No. 5 Farmers Insurance Chevrolet SS.

The process began with the outline and paint lines of the car, then moved to the base color, fill colors and finally accent colors and TV panel text.

Thousands voted, and now the Kasey Kahne 2015 Paint Scheme has been unveiled.

It’s a completely different look than the 2014 paint scheme.

Farmers Insurance, one of the nation’s largest multiline insurers, on Friday launched the “Design The 5” challenge allowing fans the opportunity to help select various design elements of the Kasey Kahne 2015 paint scheme of the No. 5 Farmers Insurance Chevrolet SS car for the 2015 racing season. The designs were developed in partnership with global performance footwear, apparel and equipment brand, Under Armour. Participants will have the opportunity to enter for a chance to win a trip to the 2015 DAYTONA 500 to see the fan designed car on the track, in addition to prizes supplied by Goodyear, Sunoco, Valvoline, Under Armour and Lionel Racing.

Fans can visit Designthe5.com to view and begin voting on the Kasey Kahne 2015 paint schemes created by a team of Under Armour designers. Over the next 10 days, voting fans will narrow down the different designs and color options to arrive at the final winning design. Voters will be able to choose from a variety of design options, including the paint lines, base color, TV panel text and accent colors.

The design challenge will run from Sept. 12-22.  Every vote cast by participants will enable them to be entered into a sweepstakes for a chance to win a grand prize trip to the 2015 DAYTONA 500 on Sunday, Feb. 22. Additionally, 20 first-prize winners will receive a 2015 No. 5 Farmers Insurance Chevrolet SS Lionel Racing diecast signed by Kasey Kahne. Other prizes include a certificate for a set of four Goodyear Tires, a case of Valvoline Motor Oil, gift cards from Sunoco and Under Amour, piston signed by Kasey Kahne, Daytona 500 Goodyear tire signed by Kasey Kahne and Valvoline apparel pack.

“We want to put a car on the track that represents Farmers and something our fans truly embrace as their own,” said Mike Boyd, head of brand and sponsorships for Farmers Insurance. “It was in that light that we felt Under Armour would be a great partner for this contest based on their history of creating innovative and unique designs.”

“Under Armour always rises to unique challenges and we love the project that Farmers Insurance and Hendrick Motorsports put in front of us,” said Adam Clement, creative director, team sports, Under Armour. “Our designers took insights from Kasey and Farmers, and created some diverse cars that we think will really stand out on the track.”

As the official insurance partner of the No. 5 Hendrick Motorsports team, Farmers Insurance will be featured as primary sponsor in 12 Sprint Cup Series races annually, including the season-opening DAYTONA 500, and as an associate-level partner in all other events. The agreement covers the 2015, 2016 and 2017 seasons.

“It’s really cool how Farmers is allowing fans to vote on my car and have the chance to win some great prizes, too. Farmers definitely cares about fans, and this is a cool opportunity for them to get involved,” Kahne said. “I enjoyed sharing my insights with Farmers and Under Armour, and I’m curious to see what the fans will choose. I’m confident it’s going to be a great looking Farmers Insurance Chevy SS that I’ll be excited to drive in 2015.”