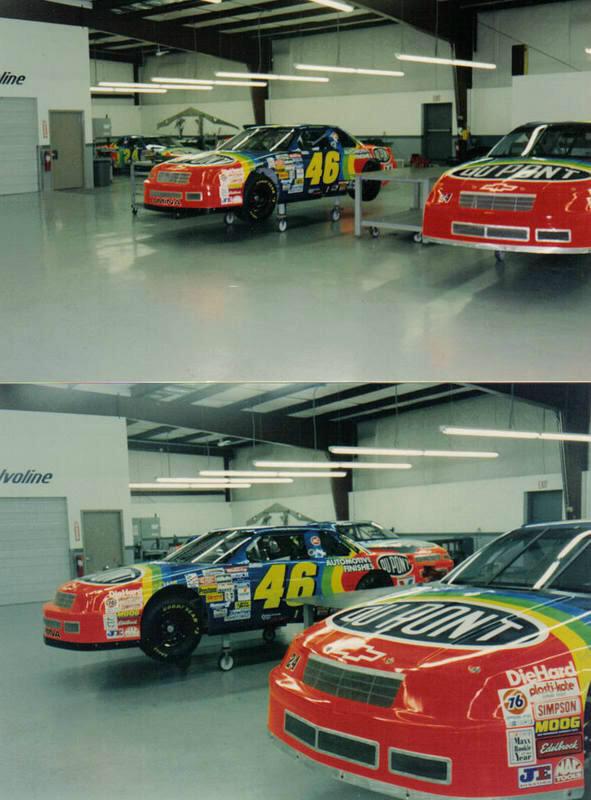 The Jeff Gordon 46 car was almost the future for the the NASCAR Rookie. Since, Jeff Gordon has driven the No. 24 car throughout his magnificent career that includes four premier series championships and 92 wins.

But his former crew chief Ray Evernham shared an interesting fact via Twitter on Tuesday afternoon. He wasn’t supposed to drive the No. 24 car. And on top of that, he offered visual proof — and an explanation.

On SiriusXM NASCAR Radio, Evernham said “good buddy, little buddy” James Piccareto (@racrboi90), who is “on the autism spectrum and he sends us a lot of things, and he somehow dug that picture up.”

“Our number was originally supposed to be number 46, and they ran into some … I don’t know if it was a full-time licensing issue or whatever with the ‘Days of Thunder’ movie or Paramount or whoever. But we had to change to number 24 because we had actually built some and I think we might have tested some cars and actually had some cars with the number 46,” Evernham said.

“When I went to work (at Hendrick Motorsports), the general manager at that time, Jim Johnson, I remember talking to him, and he said, ‘OK, your number is going to be 46.’ And I think even our tools and whatnot were ID’d No. 46. That licensing issue, I believe that’s what it was, came, and Sam Bass did the No. 24 DuPont paint scheme and we kind of forgot about the 46.”

Evernham recalled that the No. 46 car did run a race in NASCAR’s premier series out of Hendrick’s No. 5 shop.

In fact, two-time Indianapolis 500 winner Al Unser Jr. made his only series start in the 1993 Daytona 500. “Little Al” finished 36th in the race won by another famous son, NASCAR Hall of Famer Dale Jarrett.

“We did a car for Buddy Baker because Buddy helped us a good bit on the speedway stuff when we first started,” Evernham said. “We had to run a car, and we just slapped number 46 on it. To my knowledge, it’s the only time that we ever had a number 46 on the DuPont paint scheme…”

Baker failed to qualify the No. 46 DuPont Automotive Finishes/Valvoline Hendrick-owned Chevrolet for the 1993 Die Hard 500 in July at Talladega Superspeedway, a race won by Dale Earnhardt.

On Monday, Evernham offered on Twitter that his show “AmeriCarna,” which airs on Velocity starting on Tuesday, Feb. 17 at 10 p.m. ET, would have some cool Hendrick Motorsports stuff on it, so perhaps the old No. 46 car is just the beginning.

Evernham will be an analyst on Velocity’s 36 hours of coverage of the 44th annual Barrett-Jackson Scottsdale Auction, beginning Tuesday, Jan. 13 from 6-8 p.m. ET through Sunday, Jan. 18 from 2-7 p.m. ET.

One car that will be auctioned for the Jeff Gordon Foundation is the last car that Gordon and Evernham worked on together at Phoenix International Raceway, winning the Outback Steakhouse 200 XFINITY Series race in November 1999. Evernham said it’s also the car that Gordon ran and won in his last XFINITY race at Homestead-Miami Speedway in 2000.

Tune in Friday, Jan. 16 at approximately 8 p.m. to see the car on the block or bid on it. And tune in to a special episode of “AmeriCarna,” called “Break-Up to Make-Up,” with this car.