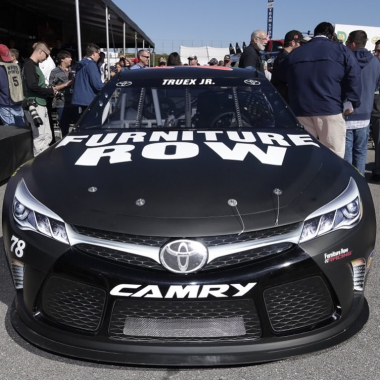 The Denver, Colorado-based team also announced that it has picked up Truex’s contract option for 2016.

By joining the Toyota NASCAR fleet, the single-car Furniture Row Racing team will enter into a technical alliance with Joe Gibbs Racing and have Toyota Racing Development, U.S.A. (TRD) build engines for the No. 78 Furniture Row Camrys.

“As we continue our quest to be a contender for this year’s Sprint Cup championship, it’s hard not to feel the excitement and enthusiasm of becoming an integral partner with Toyota next season,” said Joe Garone, president and general manager of Furniture Row Racing. “The added resources and technical support that Toyota will provide, along with having a technical alliance with Joe Gibbs Racing, definitely increases the growth potential for our team.

“The track record of Toyota and Joe Gibbs Racing speaks for itself. They are both proven winners with an unyielding commitment to raising the performance bar in the NASCAR Sprint Cup Series.”

Toyota, which joined the NASCAR Sprint Cup Series in 2007 and partnered a year later with Joe Gibbs Racing, is thrilled about the addition of Furniture Row Racing to its roster.

“Partnering with Furniture Row Racing is a great fit for Toyota and we look forward to the team fielding a Camry in the NASCAR Cup Series in 2016,” said Ed Laukes, vice president of marketing, performance and guest experience for Toyota Motor Sales (TMS), U.S.A. “Furniture Row Racing has proven to be a race-winning organization and we are confident the technical alliance with Joe Gibbs Racing will make Camrys even more competitive and improve performance on the race track. We welcome Furniture Row to the Toyota Racing family and are thrilled to have a championship-caliber driver like Martin Truex Jr. back in the Toyota lineup.”

Garone, who has been with Furniture Row Racing since its inception (2005), expressed his gratitude to Chevrolet and to Richard Childress Racing (RCR).

“I want to thank Chevrolet for its support the past 10 seasons and to Richard Childress Racing as our Chevrolet technical alliance partner since 2010,” said Garone. “The support from Chevrolet and RCR has helped our growth pattern.”

Garone said that he and team owner Barney Visser were happy to pick up the contract option for Truex, a Chase qualifier, who is in his second season as the Furniture Row Racing driver. His season totals to date include one win, seven top fives, 17 top-10s and 536 laps led.

“Martin has done a terrific job driving our No. 78 race car to a victory and into the Chase,” said Garone. “He and crew chief Cole Pearn have established an outstanding chemistry. We look forward to having Martin as the Furniture Row Racing driver in 2016 and beyond.”

The 35-year-old Truex said he is ready and anxious to drive the Furniture Row car in 2016 and rejoin Toyota. He drove a Toyota Camry for four seasons as a member of the Michael Waltrip Racing team from 2010 through 2013.

“I am happy to continue in my role with Furniture Row Racing and feel that we’ve just begun a growth spurt that will take us to a new level,” said Truex. “It’s a great organization and Barney (Visser, team owner) gives us whatever we need to be successful.

“I know the folks from Toyota and I am looking forward to being part of their team again. They build fast engines and having a technical alliance with the highly-successful Joe Gibbs Racing is an added bonus to our program. While our primary focus right now is on the Chase, I am eagerly looking forward to what is in store for our Furniture Row Racing team.”

Furniture Row Racing made its NASCAR debut in 2005, competing in 10 NASCAR XFINITY Series (NXS) races and two NASCAR Sprint Cup Series (NSCS) events that season. The team has qualified for the Chase in two of the last three seasons and was the first single-car team to earn a Chase berth.

Furniture Row Racing will now manage their own crew