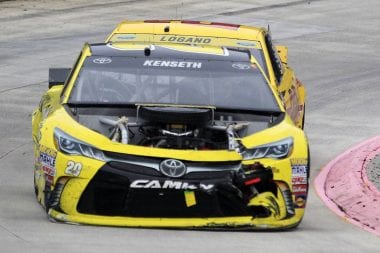 NASCAR suspended Matt Kenseth for the next two Sprint Cup Series events. Now, Brian France and Steve O’Donnell comment on Matt Kenseth Suspension. The announcement came Tuesday for his role in a crash with Joey Logano late in Sunday’s race at Martinsville Speedway.

NASCAR officials issued no other penalties to the driver of the Joe Gibbs Racing No. 20 Toyota, but did place Kenseth on probation for the next six months.

Kenseth and Logano wrecked on Lap 454 of the Goody’s Headache Relief Shot 500, with Kenseth’s No. 20 entry making heavy contact with Logano’s Team Penske No. 22 Ford. The collision carried both cars into the Turn 1 wall, severely damaging both.

The run-in was the latest chapter in escalating tensions between the two rivals during the Chase for the NASCAR Sprint Cup playoffs. Though Kenseth attempted to blame the crash on a deflated tire or mechanical issue, the altercation was widely perceived to be retaliation for hard racing between the two in recent weeks.

Kenseth was multiple laps down at the time of the incident because of an earlier crash. Logano was out front and had led nearly half of the race to that point. Steve O’Donnell, NASCAR Executive Vice President and Chief Racing Development Officer, said Sunday evening that those two factors weighed heavily in the minds of race officials, who parked Kenseth’s No. 20 for the rest of the day shortly after the two cars came to rest.

In our minds, that’s a little bit different than two drivers really going after it coming out of Turn 4 for a win versus what happened tonight.

Two weeks earlier at Kansas Speedway, Logano pressured and eventually spun Kenseth in a late-race battle for the lead. Logano, having already advanced to the next round in the Chase with a win the previous week at Charlotte, continued on to victory and was unapologetic for his aggressive racing in his post-race remarks.

Kenseth’s postseason hopes ended the following week at Talladega Superspeedway, where he said in pre-race interviews that Logano “should have stopped running his mouth, A, and No. 2, he’s lying when he said he didn’t do it on purpose.”

What we want to prevent happening is drivers or anyone participating in NASCAR to take events into their own hands and control outcomes of races. That’s a very serious thing to us, and we’ll be dealing with that.

NASCAR instituted its unwritten “boys, have at it” code in 2010, allowing drivers to settle differences amongst themselves with minimal intervention from competition officials. But NASCAR Chairman and CEO Brian France, in a Tuesday morning appearance on SiriusXM NASCAR Radio, said there were limits to how far self-policing should go.