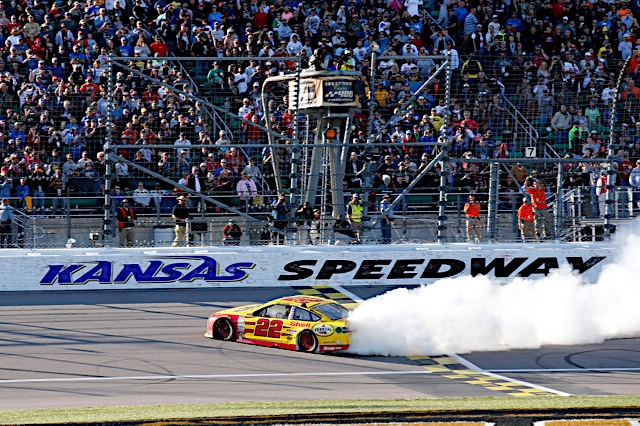 KANSAS CITY, Kan. – Block me once, and I’ll cut you some slack. Block me twice — and it’s “Gotcha.” That, in essence, was the conversation on Joey Logano’s team radio after Logano spun race leader Matt Kenseth in Turn 1 with less than five laps left in theHollywood Casino 400 at Kansas Speedway.

Logano went on to win the race after a green-white-checkered-flag restart that sent the race two laps past its scheduled distance of 267 laps. The driver of the No. 22Team Penske Ford has monopolized the Contender Round of the Chase for the NASCAR Sprint Cup, having won back-to-back races at Charlotte and Kansas.

The victory was Logano’s second at the 1.5-mile track — the first coming in last year’s Chase — his fifth of the season and the 13th of his career. But it may have come at the expense of the title hopes of the driver who replaced him in the No. 20Joe Gibbs Racing Toyota.

He finished .491 seconds ahead of runner-up Denny Hamlin, who held offJimmie Johnson at the stripe to take the second spot. Johnson ran third, followed byKasey Kahne and Kyle Busch.

Desperately needing a victory to revive his chances to make the cut for the Chase’s Eliminator 8 Round, Kenseth had grabbed the lead from Johnson after a restart on Lap 248. Using all his skills to keep the faster car of Logano behind him, Kenseth blocked Logano on the frontstretch as the duo ran up on lapped cars near the start/finish line.

Kenseth moved up to block again as he entered Turn 1, but a tap from Logano’s Ford sent the No. 20 Toyota Camry spinning.

Kenseth kept his car off the wall and finished 14th, but the result was far more costly than a mere 13 positions. After finishing 42nd at Charlotte a week earlier, Kenseth could have salvaged his season with a victory and a guaranteed entry into the Eliminator 8 Round.

Now Kenseth, who is 35 points out of the final transfer position (eighth place) likely must win at Talladega to advance.

Understandably upset by the outcome, Kenseth had a clear-cut view of the incident.

“It was really cut and dry,” Kenseth said. “He (Logano) picked my rear tires off the ground and wrecked me, so there’s no debate about that one… He was a little bit tighter on that short run than I was, and I couldn’t get away from him.

“All day we had him pretty good. I still thought I was going to be able to stay in front of him and saw those lapped cars coming and tried getting a couple runs off the top there and I was plenty clear, got up in front of him and he just decided to take us out.”

To Logano, it was merely a case of aggressive racing on the part of both drivers. As Logano pursued Kenseth during the decisive run, Logano was squeezed into the outside wall, scraping the right side of his car.

“It was good, hard racing,” Logano said. “We were racing each other really hard, and I got in the fence twice on the straightaways. He raced me hard, and I raced him hard back. That’s the way I race. If I get raced like that, I’ll race the same way.

“That’s how I’ve always been, and it will always be that way. I really couldn’t be more proud of this team. To be sitting in such a great position going into Talladega makes us feel really, really good.”

Asked whether he thought turning Kenseth was a good move, Logano replied, “I didn’t think it was a good move when I hit the wall. I’m sure we’ll talk about it. I felt like, ‘Hey, I’ve got to race hard. I got in the fence twice,’ so I wasn’t going to put up with it.”

Kenseth said he had no plans to discuss the incident with Logano.

“I’m really disappointed,” Kenseth said. “I’ve probably been one of his biggest supporters. It was an awkward thing, obviously, taking his ride, and I was excited for him when he started winning at Penske and when he got that ride and even found him today and congratulated him about racing against each other for a championship.

“I was very disappointed that he would do that… Yeah, I was running the lane he wanted to run in, but, my goodness, isn’t this racing? Strategically, I don’t think it wasn’t the smartest move on his part. He’ll probably sleep good tonight — I hope he enjoys that one. It’s not what I would have done, but he had a decision to make and that’s the one he made.”

“We were just going for the same piece of real estate,” Logano said.

A wide variety of issues befell several Chase hopefuls, making the task ahead of them that much more difficult in next weekend’s elimination race at treacherousTalladega Superspeedway.

Dale Earnhardt Jr. was the first Chaser to encounter problems, losing a lap during an unscheduled pit stop for a loose wheel on Lap 165. Coors Light Pole winnerBrad Keselowski pressed on after a slight scrub against the Turn 3 wall on Lap 188, then Kyle Busch encountered his own brush with the wall just six laps later.

A pair of Chase contenders found issues during an exchange of green-flag pit stops with 52 laps to go. Kevin Harvick’s Stewart-Haas Racing No. 4 crew was penalized for removing equipment when his gas can fell outside the pit box. Martin Truex Jr.’sFurniture Row Racing team was hit with a penalty for an uncontrolled tire. Both served pass-through penalties and fell a lap down to the leader.

Kenseth Spins at Phoenix, Logano Goes on to Win