Kenseth Spins at Phoenix, Logano Goes on to Win

The final chase grid has been set. Matt Kenseth spins at Phoenix on final restart, shaking up the chase grid.

The NASCAR race at Phoenix International Raceway was the last chance for drivers to claim their spot in the championship battle next weekend. The race was sent into overtime after a late race caution. Overtime, as expected, was dramatic. 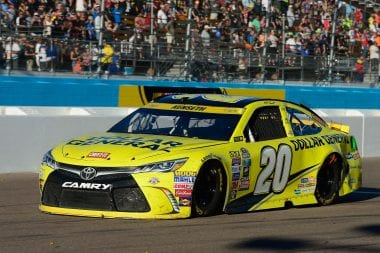 Matt Kenseth was cleared by his spotter to the bottom going into turn 1. However, at that very moment Alex Bowman received a bump from Kyle Busch. Kenseth was no longer clear to the bottom. He spun himself on the front nose of Alex Bowman. The leader was sent to the wall.

Matt Kenseth comments on the race incident, “The 88 (Bowman) was laying way, way back for that restart, more than a car width, so I got going early on purpose and I looked at him at the start/finish line, and I thought we were doing OK.”

He continued, “And I looked back, and it looked like he had a little run on me, maybe not and shortly thereafter (spotter) Chris (Osborne) cleared me. So with the glare, I started looking to the corner to approach the corner and I got turned out of the way.”

In a moment of panic things changed, “He hollered ‘Inside’ at the same time I got turned towards the fence, so I really don’t know what happened. I was just going off the information I had to try to get the best corner I could and lead more laps.”

Alex Bowman commented on the incident after the race, “It’s just really unfortunate. You never wanna ruin a chase guys day like that. I would have rather just raced him for the win. Obviously it ruined our day too. So, really unfortunate.”

He explained what happened, “We had a run on him. The #18 jacked me up, got me really loose on entry. But I was up against the inside wall when he and I made contact. So, I don’t know if his spotter cleared him or what. I hate that for Matt.”

Matt Kenseth’s longtime rival Joey Logano went on to claim the victory. The chase gris was shaken and stirred, all in one corner.

Denny Hamlin, Matt Kenseth, Kevin Harvick and Kurt Busch are eliminated. Matt Kenseth was the leader at the time of the spin. He was heading to Homestead, yet in an instant that was changed.

The 2016 final round of the chase has been officially set. Joey Logano, Jimmie Johnson, Carl Edwards and Kyle Busch advance to Championship4. Those drivers will battle for the 2016 NASCAR Sprint Cup Series championship next weekend at Homestead-Miami Speedway.

William Byron is learning as he goes

NEXT POST
Johnson, Truex not happy with NASCAR Pull up to Pit Penalty