The BLOODHOUND SSC Project is a global Engineering Adventure. The British are using a 1000mph car in an attempt to set the world land speed record.

The overall goal is to inspire the next generation to enjoy, explore and get involved in science, technology, engineering and mathematics.

See the photo album of the 1000mph Bloodhound SSC below.

The increase from the previous record is unprecedented. Normally the increase in speed of world record attempts is between just 5pc and 10pc.

But Mr Noble said the 30pc jump is needed. He says a project in the US is determined to get the land speed record back to the other side of the pond.

Why bother at all? “Because it is the most exciting thing I think you can do on God’s earth,” Mr Noble explained. 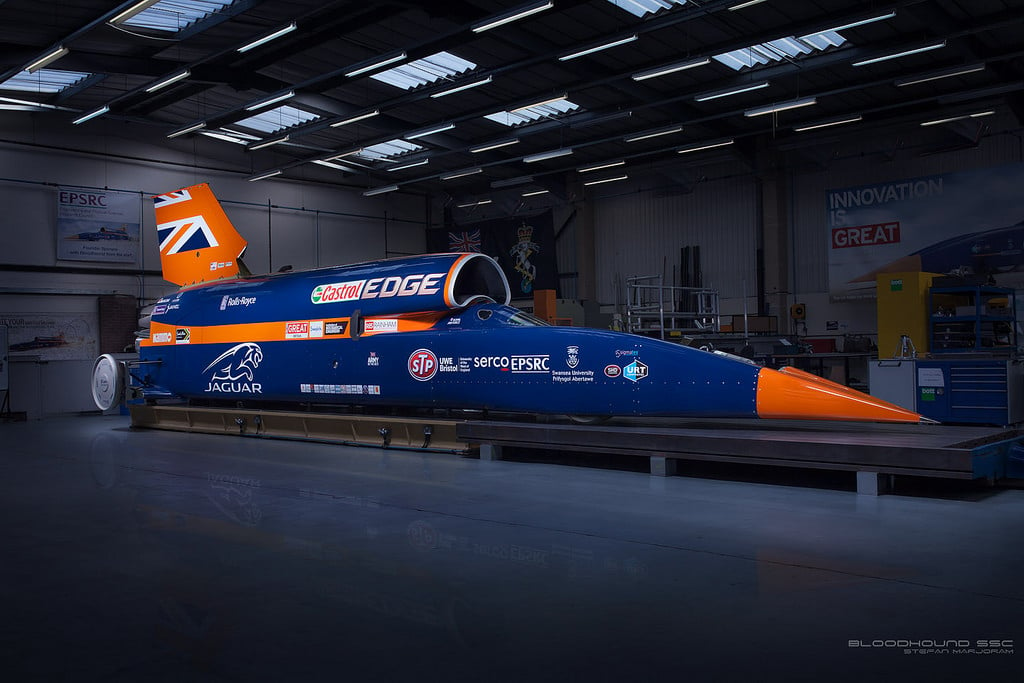 BLOODHOUND SSC is being shown in record attempt configuration, with its 2m high tail fin, required for stability at high speed, in place for the first time. Carbon fibre panels have been partially removed on one side in order to show the technology inside the car, including the Rolls-Royce EJ200 jet engine and supercharged Jaguar V8 engine used to pump oxidizer into the Nammo rocket.

BLOODHOUND SSC is not just a racing car – it is also a supersonic TV studio. There are 12 cameras built into the vehicle, including two inside the cockpit that will be live for the first time during the public show.

When the team is racing the world’s fastest car for its first time next year in South Africa, audiences will enjoy the same view as Andy and see the same information. They will know how the car is balanced, the temperatures in the engines, the speed through the Measured Mile.

Project Director Richard Noble said, “Public interest in The Project is incredible and thanks to the generous support of our partners we are delighted to able to bring BLOODHOUND SSC to London and put it on show. With the car now built and the track in South Africa prepared our focus is on racing in 2016. That part of the adventure starts with runway tests at Newquay Aerohub next Easter.”

How long does it take a NASCAR team to build a race car?