As the calendar gets ready to turn to 2016, three-time Lucas Oil Late Model Dirt Series National Champion Jimmy Owens announced today that he has paired with R&W Motorsports for the upcoming racing season. R&W Motorsports fills the void left by Rowland Racing, who Jimmy was not able to come to agreeable terms with for the ’16 campaign.

Jimmy and Rowland Racing reached victory lane on four different occasions together in 2015 including capturing the $25,000 top prize in the ‘National 100’ at East Alabama Motor Speedway in Phenix City, Alabama and the $12,000 payday in a Lucas Oil Late Model Dirt Series showdown at the tiny Macon Speedway in Macon, Illinois. The Newport, Tennessee superstar also parlayed a consistent year on the LOLMDS tour into a third place showing in the final series point standings.

“It is unfortunate that we couldn’t work out something with Bryan Rowland, Rowland Racing, and Widow Wax for the 2016 season,” commented Owens earlier today. “I have to thank them for all of their support last year and I wish them nothing but the best in the future. I also have to thank R&W Motorsports for quickly stepping in and I look forward to racing with those guys in 2016 and beyond. It was a deal that just came about very recently, so all of the details are not quite ironed out yet, but we hope to have everything ready to go for Speedweeks in February.”

With the new team, Jimmy also announced today that he will field a new chassis/engine combination for the upcoming 2016 season. The popular driver known as the “Newport Nightmare” will pilot Barry Wright Race Cars, which will be prepared by legendary Cowpens, South Carolina car builder Barry Wright and his son Lance Wright. 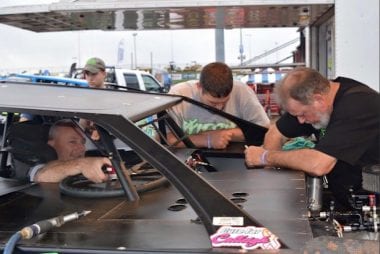 Jimmy drove a new BWRC car in a handful of races at the end of 2015, one of which netted him his $25,000 ‘National 100’ triumph at EAMS. Also new for 2016 will be a switch underneath of the hood of the #20 machine. Custom Race Engines, of Knoxville, Tennessee, will provide the ground-pounding power for the newly-formed R&W Motorsports team.

More details such as schedule plans and sponsors will be released very shortly. Keep up-to-date with the latest news and information concerning Jimmy Owens and the R&W Motorsports team by pointing your Internet browser to www.JimmyOwens20.com.

Jimmy Owens has had problem after problem in 2018