Daytona Beach, Fla. (11 January 2016) – For many teams, the 2016 Roar Before the 24 test was “business as usual”, but for 2015 IMSA Continental Tire SportsCar Challenge Series Championship winners Stevenson Motorsports, the test presented an exciting new challenge as the Jacksonville, North Carolina-based squad put in its first laps as a team in its brand new pair of Audi R8 LMS machines. Familiar Stevenson Motorsports drivers Robin Liddell, Andrew Davis, Lawson Aschenbach, and Matt Bell combined forces together in the No. 6 Stevenson Motorsports Audi R8 LMS for some strong lap times in the very first session and continued to build from there the rest of the weekend.

With 13 years of IMSA experience and strong leadership from Team Owner Johnny Stevenson, Team Manager Mike Hoffman and Strategist Mike Johnson, the team makes stepping back up to IMSA’s premiere WeatherTech series in the GTD class with a two-car effort almost look easy. Over the seven sessions, all four drivers made laps around the famous circuit to gather valuable data, consistently besting lap times as the whole crew became more familiar with the new machinery.

“It is very exciting to be at Daytona, it is always the buzz of the new season and we have a lot of buzz around us coming back into the WeatherTech series and doing it with our new Audi R8 LMS,” said Davis. “We have just been working through the procedures of learning the car, it has been a great three days here. Between myself Robin (Liddell), Matt (Bell), and Lawson (Aschenbach) we have all gotten time behind the wheel and learned the car. We have just been working with our engineer and working with the Audi squad on learning the car and maximizing its performance and it has gone really well. We are really excited to be here. It’s obviously a really competitive field and I think we can compete so it’s going to be great this year.”

The team also tested the brother No. 9 Sun Energy1-liveried Audi R8 LMS with drivers Boris Said, Kenny Habul, Dion Von Moltke, and Tristan Vautier all turning laps around the 3.56-mile circuit. The team will announce a finalized driver lineup for the No. 9 cars in the days to come.

“It is really special to be back here at Daytona International Speedway to start off the season,” said Von Moltke. “I kind of came to the test not even knowing if I would get to drive so I’m really happy to get quite a lot of laps in the new Audi R8 LMS here with Stevenson Motorsports. A huge thanks to Sun Energy 1 for having me in the car with them. Out of the box the car has been really fantastic. This is the first time Stevenson has run the car and we were P3, less than a tenth off of P1 in the very first session, so that says a lot about the team and their preparation that they have a car that good right out of the box. We haven’t touched the car much all weekend because it has been pretty solid which is quite rare for the Roar.” 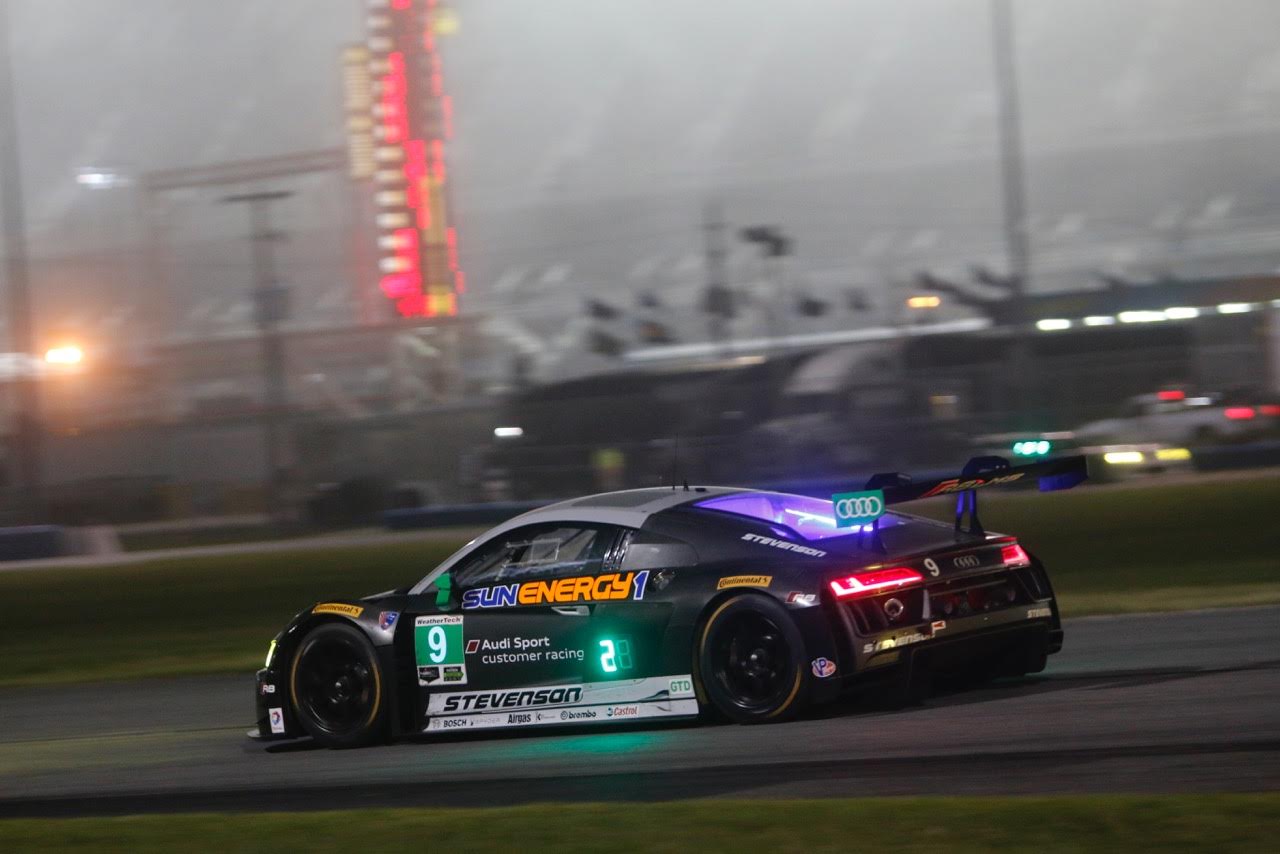 “We are very pleased with how everything has gone,” said Team Manager Mike Johnson following the test. “These cars are like the Energizer Bunny, they just keep running, and running, and running. Nothing is falling off, nothing is falling apart. It’s doing anything and everything you’d expect it to do. Our No. 6 car drivers are within three tenths of one another right now and the No. 9 car drivers are all within a second so we feel really good about that. All eight drivers are saying this is one of the easiest cars they’ve ever had to drive. I think that’s a difference for this new class of car with the ABS and the traction control and the customer program aspect of the way these cars are built. For us it’s pretty exciting at this point to feel like we have a legitimate shot in this race. In the years past, we always knew Daytona wasn’t going to be a good race for us because of the car we brought. Right now with three days on the car and everything going as smoothly as it’s gone, it’s pretty good.”

The team now looks forward to their debut in the IMSA WeatherTech SportsCar Championship series at the 54th Rolex 24 At Daytona on January 30-31.