Oval NASCAR NASCAR Cup Series Chip Ganassi: Racing is all he does

But in one form Chip Ganassi Racing has been perfect: Kyle Larson’s victory in last weekend’s NASCAR Sprint Cup Series race at Michigan International Speedway made the organization a winner in all six of the series in which it participates.

That top-to-bottom success is unmatched by Ganassi’s peers.

“You wake up one day and you say, ‘We’ve won in all these series this season,’ and that’s a pretty impressive thing, really a testament to the people who do the work,” Ganassi said. 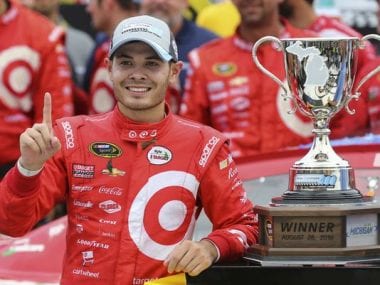 Chip Ganassi called Larson’s first Cup victory “the crème de la crème of the wins,” but the 24 Hours of Le Mans victory in June was arguably more significant given it was the organization’s first attempt at the event.

Larson saw how giddy Ganassi was in victory lane at Michigan.

Said Ganassi of Larson: “I don’t think it falls on deaf ears how he did it — in a classy way, it was a real race, it wasn’t a fluke, he didn’t have to bump anybody out of the way to win. He just won on pure speed, pure talent.”

Larson had previously won an Xfinity Series race this season – teammate Justin Marks did as well. Ganassi IndyCar driver Scott Dixon said the fact Larson’s Cup win came in the weeks after Bryan Clauson died “just kind of made sense” since the two were friends.

Tony Kanaan nearly gave Ganassi a sweep of last weekend, finishing a blink of the eye behind Graham Rahal and James Hinchcliffe in the shootout at Texas Motor Speedway. Kanaan hasn’t won an IndyCar race this season, but Dixon has (at Phoenix in April). 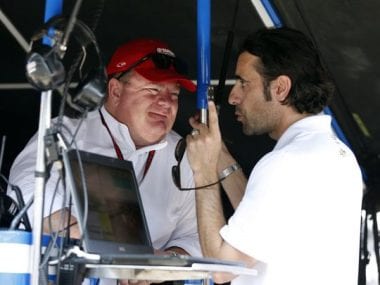 The Chip Ganassi IMSA team has won three races with Ryan Briscoe and Richard Westbrook, and it won in WEC with Joey Hand, Sebastien Bourdais and Dirk Muller. Steve Arpin has the GRC victory.

Larson’s race wins earned him a spot in NASCAR’s Chase, a chance to compete for the organization’s first stock car championship. It will take a miracle for Ganassi to repeat as an IndyCar champion.

Kanaan heads to this weekend’s race at Watkins Glen International trailing Team Penske driver Simon Pagenaud by 113 points. Kanaan and the other drivers with only a sliver of a chance to overtaking Pagenaud and teammate Will Power must come out of this weekend with 84 points of the lead to have any chance in the double-points raceSept. 18 at Sonoma (Calif.) Raceway).

Dixon is 132 points behind Pagenaud. Teammates Charlie Kimball and rookie Max Chilton have been eliminated from title contention.

Notes: Chip Ganassi said “it’s safe to say” his IndyCar team will have the same four drivers next season. He continues to seem unconcerned about signing a primary sponsor to replace Target on Dixon’s car, although he didn’t say if one has been. … Dixon said his double-finger outburst directed at Ed Carpenter after their crash at Texas was due to the aggressive way he felt Carpenter had been racing him. They have talked twice since then, and Dixon said their off-track friendship – they’re neighbors in Indianapolis – won’t change. … When Dixon’s car slid to a stop at Texas, he saw Helio Castroneves’ car bearing down on him. “I braced myself, but I think he hit the tire that was already flat because I didn’t even feel (the contact),” Dixon said.