HUNTERSVILLE, North Carolina (Sept. 27, 2016) – Kyle Busch’s work week will start at our nation’s capital and, by the time the weekend ends, he and his M&M’S team hope to be in victory lane in another capital city – Dover, Delaware.

Busch, driver of the No. 18 M&M’S Toyota for Joe Gibbs Racing (JGR), and his entire championship winning team from 2015 are scheduled to travel Wednesday to Washington, D.C., as President Obama will welcome Busch and his team members to the White House to honor his 2015 NASCAR Sprint Cup Series championship. The visit will continue the tradition begun by President Obama of honoring athletes and sports teams for their efforts to give back to their communities. 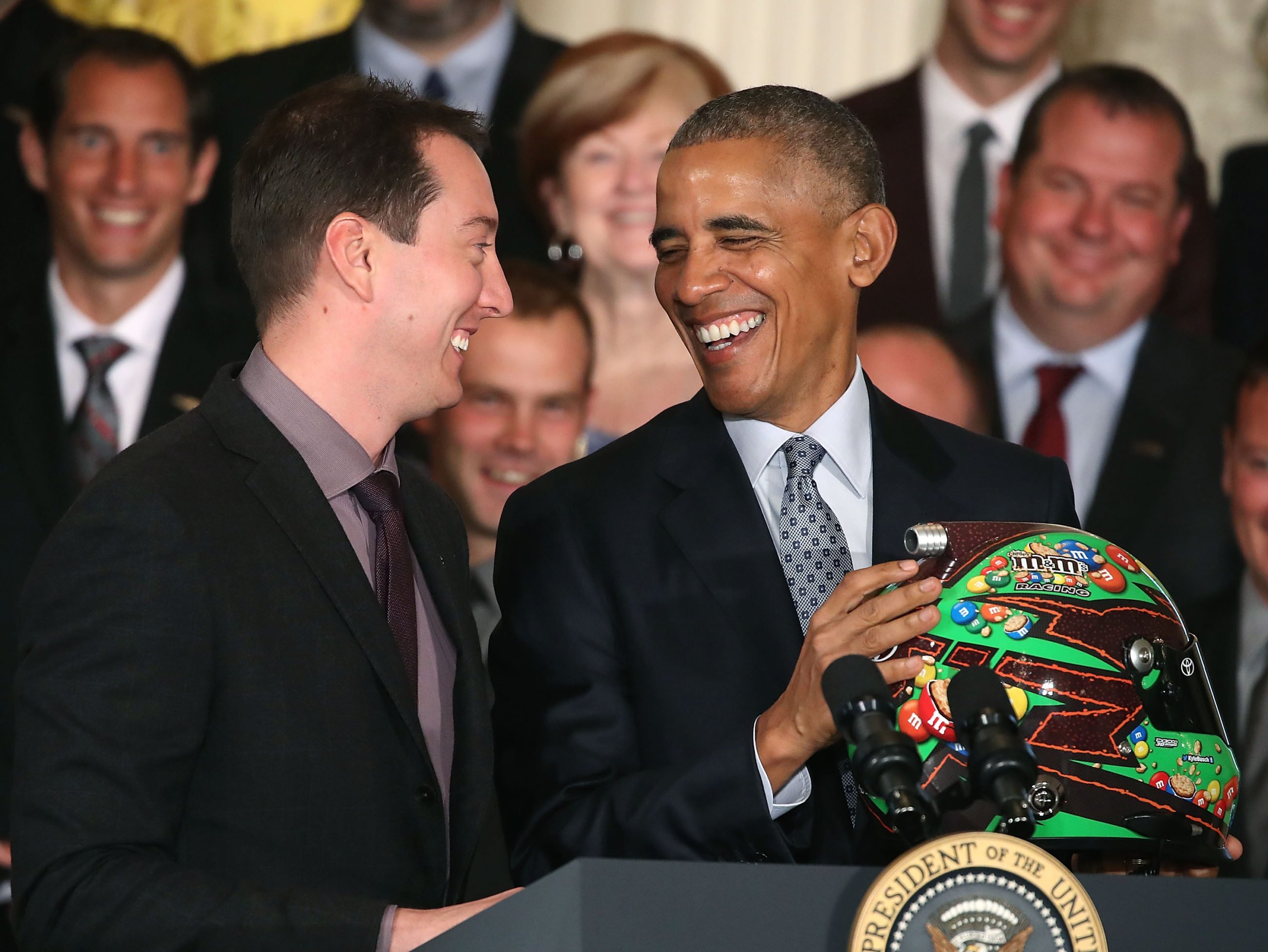 Wednesday’s visit to the White House is all about recognition for accomplishments during a magical 2015 season that saw Busch and his team rally to finish one of the best comeback stories in NASCAR history. After fracturing his right leg and left foot in an accident at Daytona (Fla.) International Speedway in February of 2015, Busch missed 11 races but rallied to make it back within the top-30 in points to make the Chase for the Sprint Cup playoffs. Busch capped his stellar Chase performance with his fifth win of the season in the series finale at Homestead-Miami Speedway, which earned Busch his first career Sprint Cup title.

After their White House visit, Busch, crew chief Adam Stevens and the entire M&M’S team will have to quickly shift their focus to this year’s title fight. Starting Friday, Busch and the M&M’S team will be just up the road at Dover (Del.) International Speedway for Sunday’s Citizen Solider 400, where the team will look to advance to the Round of 12 of the Chase. Busch enters the third Chase race at Dover looking to take another step toward defending his title. It’s the first cutoff race and Busch sits third in the standings with a healthy 33-point margin ahead of 13th place. Only the top 12 drivers advance to the Round of 12, which begins the following week at Charlotte (N.C.) Motor Speedway.

Much like the first two Chase races at Chicagoland Speedway in Joliet, Illinois and New Hampshire Motor Speedway in Loudon, Busch and his M&M’S team have some impressive stats at Dover to bolster their confidence. Busch has two Sprint Cup wins, five NASCAR Xfinity Series wins and four NASCAR Camping World Truck Series wins to his credit at the concrete mile oval. Busch has led 1,037 laps in his previous 23 Sprint Cup starts at Dover, an average of almost 45 per race. He will look to improve on his runner-up finish at Dover last fall, which is among his 10 top-five finishes and 14 top-10s at the track known as the “Monster Mile.”

So, as the M&M’S team heads to Dover, Busch is looking to go from capital to capital this week with his sights set on another win, and also to lock himself into the Round of 12 following Sunday afternoon’s 400-miler on the Delmarva Peninsula in Delaware’s capital city.

KYLE BUSCH, DRIVER OF THE NO. 18 M&M’S TOYOTA CAMRY FOR JOE GIBBS RACING:

What will be the team’s goals this weekend at Dover?

“We just need keep executing as a team like we’ve been doing pretty much every week. Dover has been a good place for me. We ran really well there last fall and ended up second. I know Adam (Stevens, crew chief) and all the M&M’S guys are working hard to have a good car off the truck and get us off to a strong start this weekend and, hopefully, we can finish off a strong run there this time. We are focused on having a solid day there and aiming to advance to the next round of the Chase.”

How do you feel with a 33-point cushion heading into Dover?

“We’ve seen that anything can happen in this business, but it’s certainly better than having a one-point cushion. There are pluses and minuses in this business, but anything can happen. We saw it with the 48 (Jimmie Johnson) last year – they had issues at Dover. We’ve had issues before and we’ve been able to make our way through, or we’ve been knocked out like in years prior. You just have to go and fight it out and try to keep track of that big picture and do what you need to do to move on to the next round with our M&M’S Camry after this weekend.”

What does it take to be successful at Dover?

“Dover, being a concrete track, is challenging. They’re all a challenge, but Dover is especially so, just because of the way you have to run around that place. The way tires sometimes wear out. The way the rubber gets put down there. You’ve got to be fast through the corner. Two-thirds of your lap time is through the turns rather than down the straightaway, so you definitely have to make sure you have a good-handling racecar – one that’s good in the beginning of the run on low air pressures and one that’s good at the end of the run on high air pressures, and even through traffic, too. Some of the most challenging times are when you’re trying to get through traffic with guys.”

Do you enjoy racing at Dover?

“It’s definitely a fast racetrack. It’s a fun racetrack, too. It makes it interesting when you get to traffic, when you have to pass guys, when you’re kind of falling down into the hole and jumping back up out of the hole to the straightaways. It’s a good place to race. It’s a competitive racetrack and, when the rubber gets laid down, it definitely changes the whole atmosphere and the whole way you run around that place.”

Does going from concrete to asphalt change the way the car handles?

“We don’t run on an asphalt racetrack that’s banked like that or shaped like that. The mile tracks we go to that are asphalt are Phoenix and Loudon, and they are relatively flat. The concrete just changes the feel a little bit, of course, and changes the way you approach the racetrack, too.”

You have two Sprint Cup wins and a competitive history at Dover. What is your outlook with your history there?

“I love that place. It’s fun to race there and it’s a place I’m looking forward to going to with our M&M’S Camry. I went there when I was 18 to race in the Xfinity Series for my first time. It will scare you the first time you race there. You carry so much speed at that racetrack and, for it to be a mile in length and for it to be concrete – concrete surfaces that we race on, anyway, are a little bit slick. It’s definitely a roller-coaster ride and you need to treat it like it’s fun and not to be scared of the place, I think, because you can get so much out of that place. There are two ways about it – you can probably be really, really good there, or really, really bad there. Some days you’re going to be better than others, obviously, with how you can get your car set up compared to the competition.”