The fight for 2016 F1 Constructors Championship glory was settled in Suzuka, as a one-three finish gave Mercedes the points they needed to seal a third successive title.

The Silver Arrows are the fifth team – after Ferrari, McLaren, Williams and Red Bull – to win three constructors’ crowns in a row. The record is four in row, held jointly by McLaren (1988-91) and Red Bull (2010-13). Will Mercedes equal that next year?

Rosberg, who on Saturday became the fourth driver after Senna, Schumacher and Vettel to claim three successive Suzuka pole positions, is the first man to win from pole in Japan since Sebastian Vettel did it for Red Bull in 2012.

Max Verstappen finished second for the second race in a row, and now has six podium finishes to his name this season – the same number as Red Bull team mate Daniel Ricciardo. 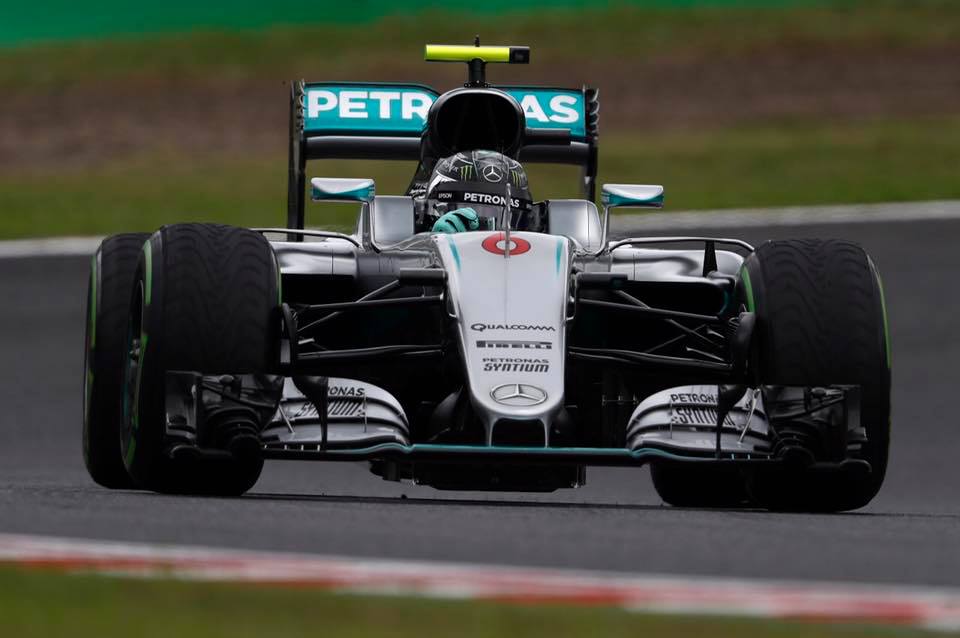 Lewis Hamilton’s winless streak now stretches to five races, the Briton finishing third for the fourth time this season. However, his surge back to third from a poor start secured him a slice of F1 history: he became only the third man to reach 100 Grand Prix podiums, after Schumacher (on 155), and Alain Prost (106).

Speaking of Hamilton’s poor start, for the fifth time this year the Briton lost ground on the opening lap of a Grand Prix. With Rosberg also losing out in six races this year, Mercedes have struggled to convert their qualifying dominance into early leads. This was the 10th front-row lockout of the season for the Silver Arrows – but there have only been two races where both cars were also running one-two at the end of the first lap…

Sebastian Vettel did at least make it through the first lap this race, but the German saw his record of a top-three finish in every race contested at Suzuka come to an end – a sequence that spanned seven seasons, all the way back to 2009. The German has claimed just one podium in his last nine races – his worst run of form since his first full season with Toro Rosso in 2008.

For just the fifth time this season, the top ten positions were filled by just five teams – and in Japan they also happened to be the current top five in the constructors’ standings – Mercedes, Red Bull, Ferrari, Force India and Williams.

Furthermore, for the second time this season (after China) and just the seventh time in F1 history, the race passed without a single retirement. There was only one race where this happened in the first 54 years of the sport; it has now happened three times in the past two years alone.

Next up is the 2016 Formula 1 United States Grand Prix at Austin – a venue that Hamilton has triumphed at in three of the last four years. Can the world champion do it again this year or will Rosberg – now 33 points ahead of his team mate – take another big step towards a maiden drivers’ crown?