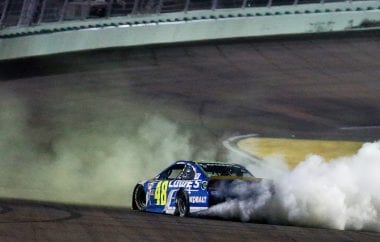 To win the 2016 championship, the driver of the No. 48 Lowe’s Chevrolet outdueled the other Championship 4 drivers Joey Logano (fourth), Kyle Busch (sixth) and Carl Edwards (34th) at Homestead.

Johnson breezed through the first round of the Chase, logging his two highest laps led totals of the season to that point at Chicagoland and Dover. When the Round of 12 rolled around, he added his all-time track-record eighth win at Charlotte, leading a race-high 155 laps on the way to a Round of 8 berth. Johnson was the first to lock up a spot in the Championship 4, winning at Martinsville Speedway for the ninth time. 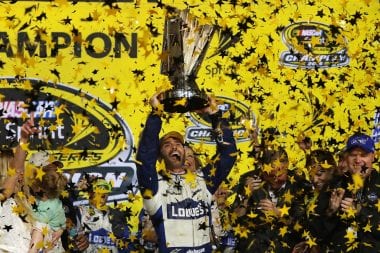 At the age of 41, Jimmie Johnson becomes the youngest seven-time champion. Petty was 42 when he captured his seventh title in 1979; Earnhardt was 43 in 1994.

All seven of Johnson’s championships were won under team owner Rick Hendrick and with crew chief Chad Knaus.

Knaus cemented his legacy as one of the top crew chiefs in NASCAR history with his seventh title, one shy of the all-time record held by NASCAR Hall of Famer Dale Inman.

Also on Sunday, Chase Elliott was named Sunoco Rookie of the Year Award.