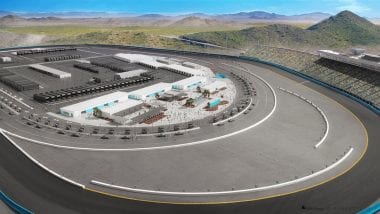 The proposed Phoenix Raceway reconfiguration includes more than surface changes. It also include tearing down the bulk of straight-away grandstands. Then, building new grandstands, in the corners, where the action is. Which almost makes too much sense.

The most interesting part of the change is the proposed Phoenix Raceway start/finish line. It’s in a completely unique spot. Just out of turn 2, near the dogleg. It’s basically a finish line, in a corner. Which I’ve yet to see done, on an oval or any track for that matter.

The only flaw in this idea is that the finish line is before the dogleg.

Drivers are already commenting on the new Phoenix Raceway track changes. Dale Jr doesn’t think it’s radical enough. He want’s it to be a little weirder. He explained, “The only flaw in this idea is that the finish line is before the dogleg.” 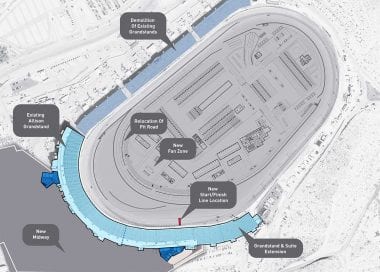 And he’s correct! The dogleg creates 10 different lanes of racing. It would make for some very interesting finishes in the NASCAR races at Phoenix Raceway, or any race at the speedway.

Though, at the same time. I’m not sure why Phoenix International Raceway was the track chosen for this project. That track was already fantastic, since it’s recent repave in 2010. If it ain’t broke, why are we fixing it?

I would have much preferred this massive racetrack configuration project to be announced at one of the 1.5 mile speedway’s. ISC has a few of those in their portfolio. Instead, they picked one of the unique tracks and announced plans to make it a bit more unique.

I think the new Phoenix Raceway will be better. But why take that risk? Anytime you tear up a good racing surface you’re betting that it won’t be ruined. It could always go wrong. This investment could have been more useful on one of the 37% of NASCAR tracks that aren’t unique at all.

Joey Logano was at the press conference as the new Phoenix track layout was announced. He spoke a bit on the changes, “I couldn’t be more excited about seeing this. I’m excited to get on this track and see what happens. To me the biggest thing is going to be the restarts.”

The 2016 NASCAR Xfinity Series champion driver Daniel Suarez was also there. He is excited for placement of the start/finish line. He explained, “You can maybe win the race going sideways right there. You never know, us drivers can be crazy sometimes.”

NASCAR’s most popular driver, Dale Earnhardt Jr isn’t just excited about the new track configuration within the Phoenix Raceway Project. He’s also excited about the changes made within the garage area. He stated, “Interesting changes. Hoping for a little extra elbow room in that Cup garage.” 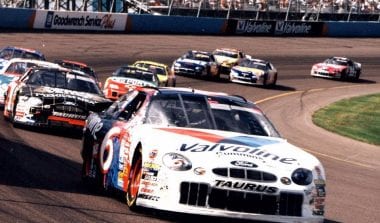 ISC has owned Phoenix International Raceway since April 1997. Since then the track has been reconfigured and repaved multiple times. None of those changes have been on this level. The changes will make Phoenix Raceway a completely unique racetrack, this is a nice change of pace from the typical cookie-cutter track designs.

“This is a great day for ISC and Phoenix International Raceway, but more importantly, for racing fans in the state of Arizona and around the world,” ISC Chief Executive Officer Lesa France Kennedy said in a press release from the track.

She continued, “It’s a true pleasure to begin work on this project designed to enhance the experience of the great fans who love to watch our races in Phoenix and enjoy this beautiful area. Having Phoenix Raceway within our prestigious stable of venues always has been a tremendous asset and source of pride for us. We are thrilled to create a best-in-class facility in Phoenix, and we’re confident it will grow the fan base here and further serve as a destination track for motorsports fans everywhere.”

“When our project is completed, we will have a venue that delivers amazing fan experiences to go along with our reputation for great racing action,” Phoenix Raceway President Bryan R. Sperber said in a track release. “By shifting the start/finish line to Phoenix Raceway’s famed dog leg, fans will be perfectly positioned to watch one of the most exciting turns in motorsports. We are confident The Phoenix Raceway Project powered by DC Solar will put racing in Arizona in a whole new and exciting light.” 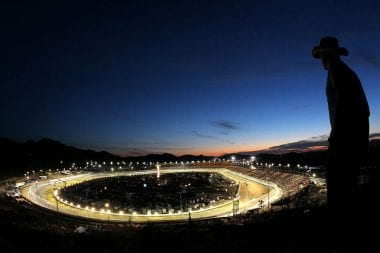 Phoenix Raceway was last re-paved in November 2010. Construction began after the April 10th, 2010 NASCAR race (pictured here). That year, ISC and the Avondale City Council announced a $100 million long-term development for PIR. $15 million would go towards repaving the track, for the first time since 1990. That cost also resulted a new media center building. The track retaining walls were also transformed from asphalt to concrete.

The 2010 construction was more than a repave, it was a reconfiguration of the track. The front stretch was widened by 10 feet. The banking was changed to the modern-day progressive banking, as seen at most new construction NASCAR tracks. The dogleg was completely changed, curbing there was removed. It created awesome racing on the backstretch. The dogleg now created a funnel of cars into turn 3.

Now, today the plans announced another track re-configuration. The construction is planned to be completed in 2018. The result, the NASCAR track will have yet another new layout. View the new Phoenix Raceway photos below.

Tomorrow, Phoenix International Raceway is hosting a NASCAR test session. This announcement came from the speedway a day before NASCAR comes to town.

The Phoenix Raceway construction is expected to the be completed by November 2018.

Talladega Superspeedway renovation project announced at the cost of $50m