As of now, iRacing dirt is on the schedule.

It’s long been expected that iRacing would release the dirt section of their service with the upcoming March build. That’s season 2 of 2017. S2 officially begins on March 14th, 2017.

iRacing dirt car racing still might be released on that date. However, as of now no iRacing dirt schedule has been posted. Just two races, listed below. That leaves us to believe that, aside from a welcomed surprise, it’s not ready yet. 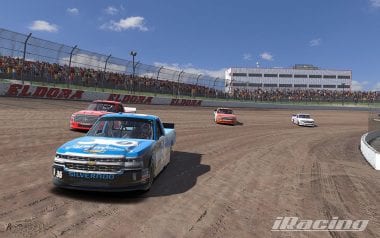 As of now, the first official iRacing dirt event will take place on July 18th, 2017 at Eldora Speedway. That’s one of two dirt racing dates listed on the current iRacing schedule. It’s a whole week of racing, not just a single date.

July 18h and 19th, the NASCAR Camping World Truck Series invades Eldora, the real life one. That’s the same week of the Dirt Derby, the famous NASCAR event, on the Ohio dirt track.

The other iRacing dirt truck event is listed on August 22, 2017, also at Eldora Speedway.

It should be noted that the schedule below is just the NASCAR truck schedule on iRacing. That means the asphalt version, with two dirt races. The actual dirt section of iRacing (including late models, midgets, sprint cars, street stocks and legend cars) doesn’t have a schedule. Every other class on iRacing has their S2 schedule posted. That indicates we won’t be getting iRacing dirt in the upcoming build.

However, in between S1 and S2, iRacing has a wild-thing called 13th week. This is a week of nothingness; figure 8 races, road cars/oval cars racing together, F1 cars at Bristol, crazy things like that. It’s a full list of fun races that mean absolutely nothing at all, point wise. Though they are generally a blast to compete in, for that very reason.

Given iRacing dirt is now in alpha testing I wouldn’t be surprised if we had a dirt class to race during 13th week. After all, if it breaks, that’s ok, it means nothing anyway. That would certainly be appreciated by all of us who have been waiting nearly a year to do some dirt racing!