This page will be update with 2017 UMP Summer Nationals results as the tour rolls through the summer.

Concord, NC—April 27, 2017— The DIRTcar Summer Nationals and the Summit Racing Equipment Modified Nationals 2017 schedule promises a summer of hot action on the track.

The tours’ schedules mirror each other for all but one race during their 32 consecutive days on the road. The two touring Series embark on one of the most gruesome schedules in the motorsports industry as they will travel across eight-states-including Indiana, Illinois, Iowa, Tennessee, Kentucky, Missouri, Michigan, and Ohio— in four-and-a-half weeks with back-to-back racing nearly every night. The Late Model Series will take a break from racing only three times in 32 days, and the Modifieds will take four.

Every year the Series’ swing through June and July proves to be mentally and physically trying on drivers and their teams, preserving through their passion and dedication to the sport. The 2017 DIRTcar Summer Nationals and the Summit Racing Equipment Modified Nationals will kick off at Brownstown Speedway in Brownstown, IL on June 14. 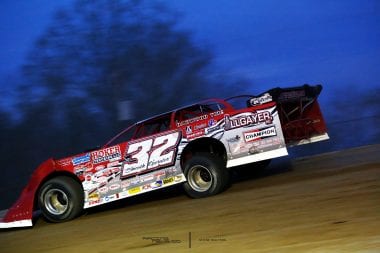 The 2017 schedule boasts 29 races and is broken down into four weeks: Tri State Week, Independence Week, Midwest Week and Champions Week. Each week a new champion will be named based on a weekly points system.

Additionally, the DIRTcar Summer Nationals will cross paths with The World of Outlaws Craftsman® Late Model Series in the 2017 season. The Series’ collide at Terre Haute Action Track on June 30 and at Federated Auto Parts Raceway at I-55 on July 1.

Note: Originally, a weekend at LaSalle Speedway was pre-scheduled as the tour opener. However, the June 16-17 races have since been cancelled by DIRTcar with sanctions lifted. Those races have been replaced with an event at Sycamore Speedway in Maple Park, IL as well as Peoria Speedway in Peoria, IL. The tour now opens a few days earlier.