Shannon Babb Explains Why He Only Runs Regional Dirt Races

If you reside outside of middle America, the name Shannon Babb might sound foreign to you. But you’ve heard of him…

The Moweaqua Missle, at age 43, is on fire. Technically, the driver based out of Moweaqua, Illinois been on fire for awhile. 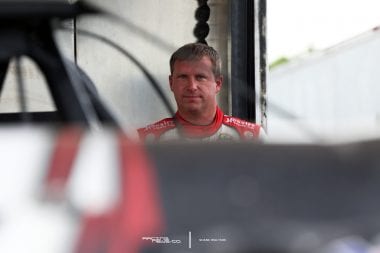 He started racing in 1992. Since, he’s become a multi-time DIRTcar UMP Summer Nationals champion while collecting some of the most prestigious dirt late model race wins around.

This year, he’s in the battle for another DIRTcar UMP Summer Nationals title. The points aren’t updated yet but after last night’s win he should be 2nd or 3rd in the Hell Tour standings.

Recently, in December, the #18 team picked up the preliminary win at the Gateway Dirt Nationals. He was awarded with a $5,000 check but more importantly became this first winner inside the Dome in St. Louis.

Last month, Babb took it to the Lucas Oil Late Model Dirt Series. Picking up his first LOLMDS win and the $10,000 check to go with it at Luxemburg Speedway in Luxemburg, WI.

Both of those races are against the best of the best, on a national scene. Those are far from just ‘regional’ races.

As a fan, I asked Babb that very question…

Are you having the best year of your career?

Shannon Babb, “No. We’re having a good year.”

Would you consider yourself a regional driver?

The driver of the #18 dirt late model, “Yeah, you know. Years ago I traveled. Ran state wide and everything.”

He continued, “But recently, the last couple years, it don’t make no sense to do anything else but regional.”

Babb explained, “Just the expense of traveling. You know, we got a lot of good races right here in this area anyway.”

So you’re content with not running a national tour? Even though you can be competitive doing so?

“Oh yeah. And we have been. We’ve done it, been there and I know what it’s all about. I’m happy with where we’re at.”

Just you’re done with the road?