Don’t you wish they’d open the rules up a bit for the Eldora Dirt Derby?

Maybe put some rear steer in it? It would certainly be better representation of how dirt racing really is.

Tim McCreadie isn’t sure of that, “I don’t know. I don’t really know their rules in and out of what should be better for racing for them, or not.”

“From my experience, when I drove in the NASCAR Busch East Series on bias ply tires vs the radial tires that were Busch and Cup cars. I thought the bias ply tires were way more fun to drive.”

Because they wore out?

McCreadie details the driving style, “They wore out. But, you could slide them. You could run sideways. You’d see guys kinda throwing smoke off their tires, where the fans could see that too.” 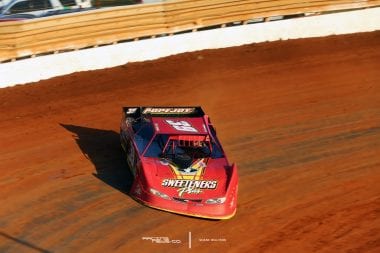 In comparison, “The radial tires… There’s no give to ’em. Like when you all the sudden snap, that’s because you can’t feel it.”

“It’s just made it harder to race. I thought the racing was better when you could go in there and kinda dirt track it a little bit.”

“As a fan, when I grew up, look up them old tapes from the 80’s. When them guys right rear’s were smoking.”

He explained, “They’re all bias ply tires where the guys could actually slide it. And if you did it too much, you slowed down. You know, the guy who did it the least mighta won but the crowd could see it.” 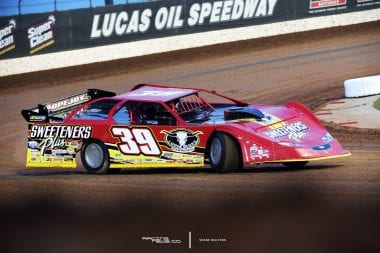 McCreadie talks modern NASCAR, “Usually, when them kids get sideways right now. I’m telling you, they do a heck of a job, they should crash. When you see them sideways on TV, they should be wreckin’.”

“But it would be cool to see them doing that more. Wigglin’ but when they’re under control.”

McCreadie declares, “Yeah, but when you’re a fan watching on TV or sitting in the stands it should be more obvious. The more obvious you can make it the better. Somebody could say ‘Look what just happened’ ”

You’re working your tail off in them cars on radial tires.

“A lot of times, people in the stands or on TV, you don’t even see it. Like, I drove them. You’re working your tail off in them cars on radial tires. There’s a lot of times you’re maybe 10 degrees yawed out. You don’t see that.”

Alternatively, McCreadie remembers his races on bias ply tires, “I followed a guy in Busch East [K&N Pro Series] in practice. This guy was so sideways, I came on the radio, ‘This guys wreckin’ he said, ‘No. That’s how they all run.’ ”

“I realized I had to do that to be just as fast.”

He continued, “But the people that were coming out of the stands were saying, ‘Man that was amazing. These cars are drifting around here’. Same car, go out there in Busch and you can’t even do it.”

Tim McCreadie: No interest in running the Eldora Dirt Derby