Kyle Busch and Dale Earnhardt Jr reminisce on their feud

After wrecking Dale Earnhardt Jr at Richmond there was a shooter on the loose at Kentucky; Kyle Busch then hired an FBI guy to follow him around for safety

In 2008, Dale Earnhardt Jr filled the seat of Kyle Busch at Hendrick Motorsports. That’s not actually how it went down. But, that’s the way it appeared to some of the fans.

10 races into his new ride, Kyle Busch and Dale Earnhardt Jr found themselves in a battle for the win. Each of them had something to prove. With a handful of laps remaining at Richmond Raceway Denny Hamlin stopped on the track to bring out the caution and setup a shootout.

Inch by inch, they pushed it further into the corner while in a side by side battle. Dale Jr ran the outside, barely scraping the wall to use every inch of the track. After a few laps, something had to give.

Kyle Busch got in hot on the bottom. He got loose, slid up the track, put Dale Earnhardt Jr in the wall and Clint Bowyer went by the both of them to take the win.

That was the tipping point for JR Nation.

“Whether it was fair or not. He’s gunna need some security from all of us,” Dale Earnhardt Jr said in his post race interview after being wrecked by Kyle Busch that day.

“We went from the motorhome lot on the golf cart to the helipad. We used to helicopter out at that time, it was still pretty busy to get out of race tracks,” Kyle Busch opens the story via the Dale Jr Download.

“Past that, for the rest of the year, there was crazy death threats. There was death threats to the house. There was a guy that called — I don’t remember if he called NASCAR or the race track but it was Kentucky Speedway.”

“They said, ‘We’ve had a tipoff that there’s a shooter on the loose.’ Like a guy’s coming to the race track with a shotgun.”

“Stuff like that. It wasn’t happening weekly but periodically through that time. Definitely through the rest of 2008 and maybe once or twice in 2009.”

“So, we actually had a behind the scenes FBI guy tailing me through the rest of ’08. We didn’t think we needed him anymore after ’08 was over,” Kyle Busch explains.

“I had no idea about that,” Dale Earnhardt Jr says.

“He came with us about everywhere,” Kyle Busch concludes. 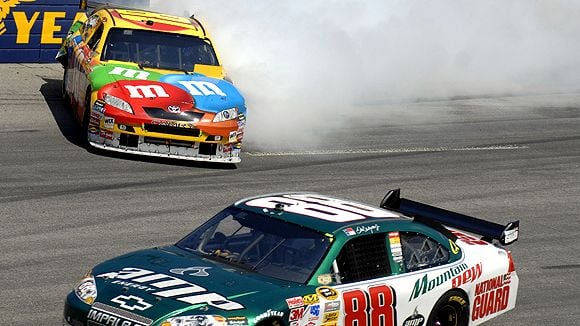 On the very next trip to Richmond in the fall, Dale Earnhardt Jr and Kyle Busch were again side by side for the lead. This time, Dale Jr was on the inside.

Dale Jr: “I felt like if I didn’t wreck you at some point, my fans were going to be really pissed. I was under a lot of pressure from my fans to do something.”

“And for myself, I felt in my heart, if I don’t get him back then everybody’s gunna look at me as this guy that just gets wrecked and not do shit. Not only am I mad at this guy but I gotta show everybody else here that I’m not gunna take this.”

“I don’t know what’s that’s about. Ego, just being hard headed and ignorant. I had to do something. Here’s this perfect opportunity right there in front of me at the same race track.”

Kyle Busch: “He had been contemplating it.”

Dale Jr: “Oh yeah. Dreamin’ about it. Thinking about it all the time and dreading it. I didn’t wanna do it. But, I had to do it.”

He drove it in deep, locked up the left front and drove into the side of Kyle Busch. Years later, Dale Earnhardt Jr said he did that on purpose as retribution.

Dale Jr: “I hate confrontation in any form. I like everybody to be happy. But, that’s not gunna be the way it is on the race track.”

“I felt this pressure that if I didn’t do something that I was always gunna be labeled as this, “He’s not his daddy. He don’t f****** stand up for himself. He lets people push him around.’ ”

“The only thing about it is… I didn’t do a good enough job of it. Kyle backed into the fence just barely and kept on goin’. I was a little disappointed.”

Kyle Busch: “Yeah, instead of finishing 4th I think we finished 8th.”

Kyle Busch: “Spring Richmond happens and I am public enemy number 1. The chorus of the boo’s at driver intro’s is spring Richmond.”

“Even when I first started… I had my first Xfinity Series race at Charlotte Motor Speedway. That was right in the time when Kurt was getting into it with Jimmy Spencer.”

“I was guilty by association. Week one, race one, moment one. I get boo’d at driver intros. Hell, if that’s my welcoming moment, I’m under a no win situation to begin with.

Dale Jr: “We weren’t smart enough to take it to the race track and use it as a positive for the sport. When Rusty and Dad were going through that, man they were in their mid-thirties.”

Kyle Busch: “Wasn’t it Geoff Bodine and your dad that kinda had that. But worse?”

Dale Jr: “They did. But, they really hated each other and wrecked each other until Bill France Sr got in there and said, ‘Yall, gotta quit.’ ”

“Nobody stepped in to straighten us out.”

This was a feud that lasted for years beyond Spring Richmond. Why? Mostly because they never sat down to talk it out.

Kyle Busch: “When can we find the time to burry this hatchet? I hate being mad at the guy. But, I was just always waiting on him and I don’t know why.”

Dale Jr: “That’s so crazy to me. I though Kyle hated my guts. Didn’t think you wanted anything but bad shit to happen to me. It’s just weird to hear you say that you were hoping things would turn around. I think I was too. Just yeah, we’re just really hard headed,” Dale Earnhardt Jr concluded.

Corey LaJoie vs Denny Hamlin: A timeline of the feud that led to a meeting with NASCAR