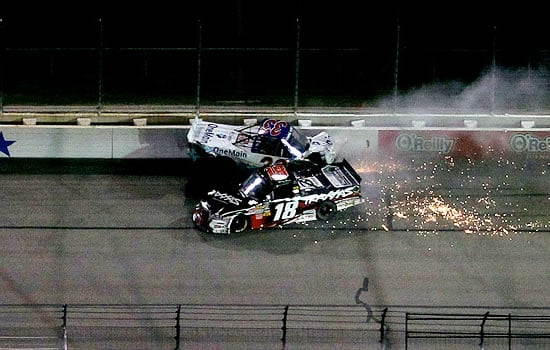 FORT WORTH, Texas — Kevin Harvick won the NASCAR Truck Series race Friday night at Texas after his championship-contending truck driven by Ron Hornaday Jr. was knocked out of the race by a retaliating Kyle Busch.

Harvick wrapped up the season owners’ title for his No. 2 truck, finishing ahead of series points leader and polesitter Austin Dillon, who takes a 20-point lead over Johnny Sauter into the final race in two weeks.

But Hornaday was knocked out of the race on the 14th of 148 laps when Busch retaliated for contact between them by pushing the four-time champion into the wall.

Busch and Hornaday made contact when trying to go three-wide around a slower truck driven by Johnny Chapman, who was on the inside. Hornaday ended up in the middle and made contact with Busch when they got loose, then both brushed the wall before the caution flag came out.

“I think Kyle definitely showed his immaturity, and why he’s just one of those guys that just can’t stand to lose, and just a poor loser,” Harvick said. “Unfortunate for Ron. It’s too bad that a guy over here trying to win races got in the middle of the championship fight. At some point, he’ll feel the pain.”

Busch got behind Hornaday, and kept pushing until the No. 33 truck wound up in the wall. Busch’s truck also was damaged heavily, and NASCAR parked him for the race with possibly more penalties to come.

“This is just stupid,” Hornaday said. “He knew I was there. … He just drove me into the fence.”

There was a short meeting between Busch and NASCAR officials after Friday night’s race. They were expected to meet again Saturday morning.

“Let’s have at it, so I can go in there and beat (him),” Hornaday said outside the NASCAR hauler after the race. “He lives too close to me. We’ll see what NASCAR does. If they don’t handle it right, I’ll be at his house Monday morning.”

In the garage after the accident, Hornaday had said he would be “really upset” if NASCAR doesn’t park Busch for Sunday’s Cup race. Busch said then that he wasn’t worried about that possibility for the Nationwide or Cup races at Texas this weekend.

In the interview room after the race, Sprint Cup championship contender Harvick said he had been “threatened with my life to stay away from Kyle Busch. … Three more weeks.”

Hornaday dropped to third to fourth in points, his margin increasing from 15 to 48 after finishing 34th in the 36-truck field.

“I lost my cool, no doubt about it. I’ve been wrecked four weeks in a row, and I’ve had enough of it, and I retaliated,” Busch said by his hauler after the wreck. “So it’s certainly my fault for doing that. If everybody wants to say, ‘Hornaday is racing for a championship, roll over,’ that’s not my fashion. That’s not anybody else’s fashion out here.”

Busch made no comments after his postrace meeting with NASCAR officials.

“If he isn’t winning the race, he’s pouting and throwing a fit, and it’s one of those things where he’s going to grow up or he’s going to have some swollen eyes,” Harvick said.

James Buescher finished 19th, but was third right behind Dillon before running out of fuel on a caution that set up a green-white-checkered finish. Buescher dropped from second to third in points, 28 back.

That yellow flag wiped out a 4-second lead for Harvick, but he still drove to his fourth victory of the season and 13th in the series.

Harvick had a big lead in the race over Dillon, who was just in front of Buescher after 141 laps when something broke in David Starr’s truck and spilled fluid all over the track. That brought at the caution, tightening the field though nobody went into the pits.

During the caution laps, Buescher ran out of fuel. He had to get a push to get down pit road, but then never could get the truck to fire up to get back on the track before the restart.

“You never want to wish bad luck on anybody at a race,” Dillon said. “It was unfortunate for him. He had a great truck. It would have been interesting to see what that last restart would have done.” Buescher led five times for 56 laps.

Harvick had a race-high 61 laps led before winning with an average speed of 121.262 mph on the 1½-mile, high-banked track.

Dillon has to finish only 16th or better at Homestand-Miami Speedway on Nov. 18 to win the title. The grandson of Richard Childress is moving to the Nationwide Series next year in a No. 3 Chevrolet owned by his grandfather.

Written By: The Associated Press