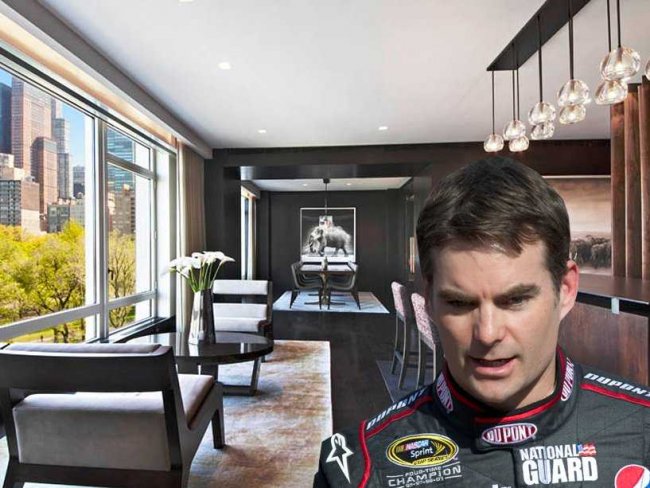 The Jeff Gordon New York Apartment is definitely not the pits. In fact, listed for sale at $30 million, one thing’s abundantly clear about this grandly located and luxuriously appointed apartment: owner Jeff Gordon has done more than fine during his years of NASCAR racing and hanging in its famous pits. With more than $129 million in career earnings, Gordon is NASCAR’s all-time earnings leader. And this apartment puts the lead in high-octane living.

The race-car driver, who just competed in the 700th race of his career, bought the three-bedroom, 3.5-bathroom residence at the exclusive House section of 15 Central Park West back in 2007, just after marrying his second wife. The couple then turned Apartment 7C — what was essentially a shell — into a palace thanks to what the listing agent called “a painstaking, no-expense-spared renovation [that] has ensured that every detail of this 3,454-square-foot home exudes modern elegance and comfort.”

If it seems incongruent for a NASCAR star to not only own a prestigious Upper West Side residence but also to have had the vision to invest and create such a luxurious ambiance, Gordon has long had a passion for the Big Apple. “I love that there are certain times that I’ll get recognized, and it’s kind of surprising and fun. But I can walk down the street most of the time and not be recognized, and I enjoy that, too,” Gordon told the amNewYork newspaper three years ago.

Now, however, the 42-year-old father of two has decided that the New York real estate market for high-end properties is hot enough again to try and make a deal. The Gordons built a massive custom home in Charlotte, N.C., where the family has lived since 2010 when they aren’t globetrotting with ski trips to Aspen and sightseeing in Belgium.

As for what Jeff Gordon is willing to leave behind in his former adopted hometown, it’s top-of-the-line exquisite, Jeff Gordon New York Apartment includes:


And if $30 million still sounds like a lot of cash for the Jeff Gordon New York Apartment , consider the amenities that come from living in one of New York’s most coveted addresses. Designed by famed architect and historian Robert A.M. Stern, 15 Central Park West is close to Time Warner Center, Lincoln Center, the Theater District, and some of the world’s best shopping on Fifth Avenue and Madison Avenue. The building is fully staffed and pet friendly with a landscaped motor court, garage, 14,000-sq. ft. fitness center with a 75-foot sky-lit lap pool, spa and sauna/steam rooms, screening room for 20 guests, private restaurant and catering, private wine rooms, library, business center, 1,400-sf meeting space, game room, outdoor terrace, and children’s playroom.