The Dale Earnhardt Jr Barrett Jackson cars were auctioned off for a good cause. Barrett-Jackson Scottsdale Collector-Car Auction sold the cars on Saturday.

$400,000 was netted between the two cars. The total will be sent to Nationwide Children’s Hospital based in Columbus, Ohio. The cars were sold commission-free, meaning Barrett Jackson isn’t taking there usual fee for the sale, all the money is going directly to charity.

Both Dale Earnhardt Jr cars were sold on January 21, 2017 at the auction. Learn more about each car below. 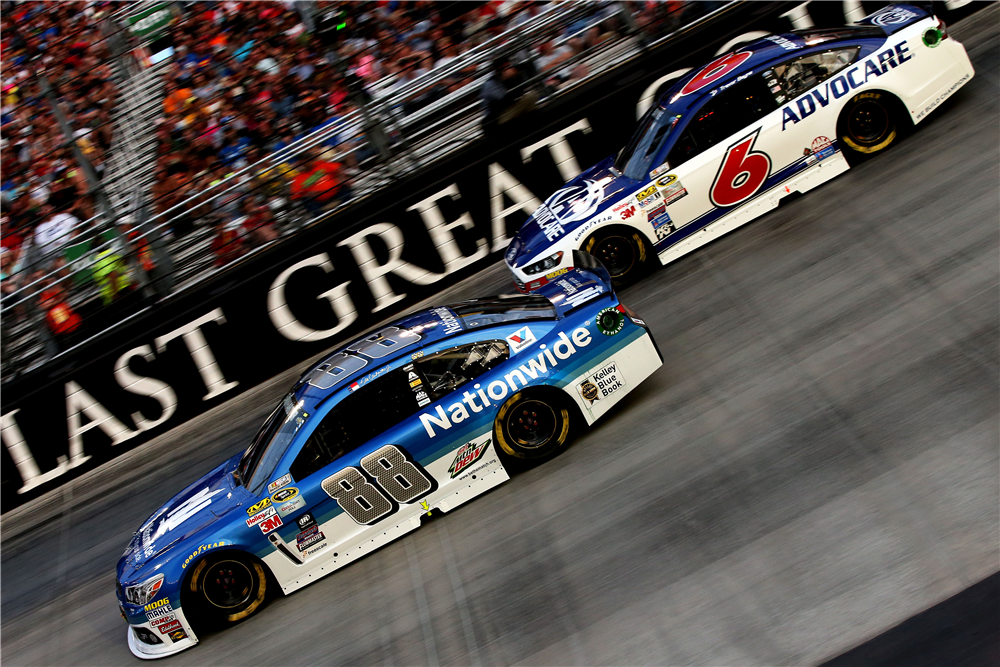 This Hendrick Motorsports No. 88 Nationwide Chevrolet SS was driven by Dale Earnhardt Jr. It was an active short track NASCAR chassis from 2014 to 2015. The car was raced in the Monster Energy NASCAR Cup Series, known as the NASCAR Sprint Cup Series during the 2014-2015 seasons.

Phoenix: The short track chassis was first used at Phoenix International Raceway in 2014. In it’s debut on track, Dale Earnhardt Jr took the chassis to the lead and nearly won the race. On March 2, 2014 the car made it’s debut with Earnhardt Jr. He led 51 laps in the new chassis at Phoenix. Dale Jr and chassis 88-857 came up just short, the car ran out of fuel while leading. He came up a half of a lap short, he rolled across the line with a runner-up finish.

Richmond: The car returned to NASCAR racing at Richmond International Raceway event in 2014. In April 2014, the car finished 7th. In the fall race, it netted a 12th place finish.

Bristol: In 2015, the Hendrick Motorsports 88 team brought the chassis to Bristol Motor Speedway. In April, the Spring race at Bristol, Dale Jr finished 16th. The same #857 chassis returned to Bristol for the August night race, were he finished 9th. 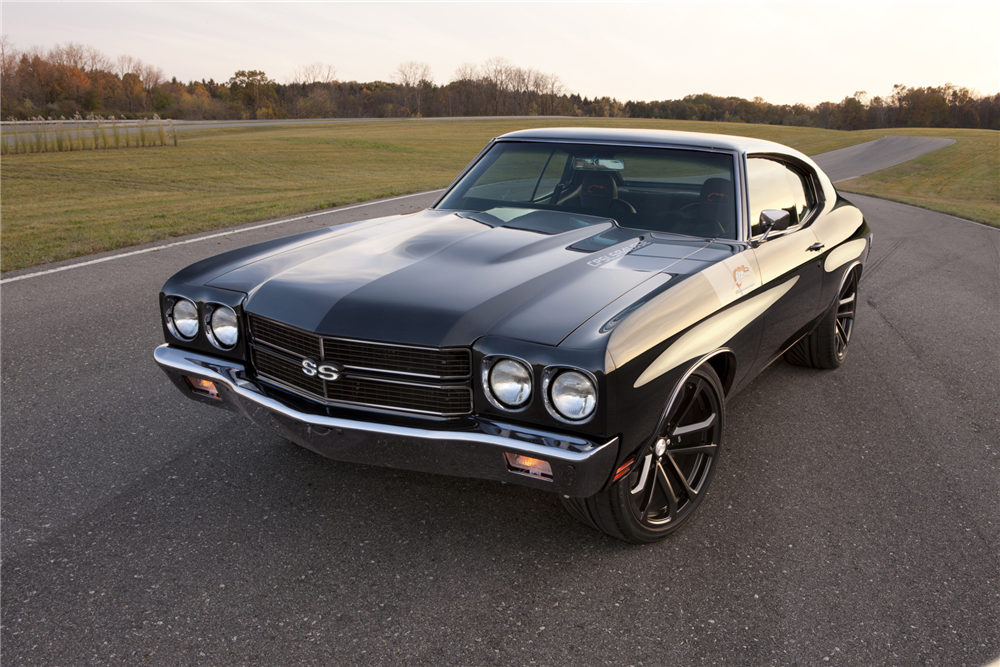 We must be trapped in a super-invisible time machine because what you’re looking at is a brand-new 1970 Chevelle. It wasn’t built in 1970 at all, only the chassis frame was. Everything else is brand new on this car. I’m honestly extremely surprised this car didn’t fetch more at the auction. It’s essentially a 1 of 1 car.

The Black Diamond colored 1970 Chevelle was engineered, built and tested by a team of GM technicians and engineers working at the super-secret GM Milford, Michigan, Proving Grounds.

GM teamed with NASCAR superstar Dale Earnhardt Jr. to build a thoroughly modern Pro-Touring Chevelle. Though based on a clean 1970-vintage Chevelle frame to simplify registration and title issues, every other component is brand-new, starting with the GM Restoration Parts-licensed reproduction body from Dynacorn International.

Dale Jr. is a racing driver, he wants his cars with superb handing. So the GM Milford team simply opened the Detroit Speed Inc. catalog and picked up the phone. The front suspension in this ‘1970’ Chevelle features tubular control arms with coilover struts and beefy sway bars. Out back, a coilover upgrade kit, along with a fat sway bar and Swivel Link control arms to enhance rear-axle articulation for ideal handling.

Moser supplied a freshly cast, complete 12-bolt axle with limited slip and 3.73 gears for an ideal compromise of acceleration and highway cruising.

It better go fast right? It has 556-horsepower, supercharged Chevrolet Performance LSA Connect & Cruise powertrain system was selected. Based on the potent 6.2-liter supercharged LSA engine delivered in new Cadillac CTS-V and ZL1 Camaros. Surprisingly, Dale Jr went with an automatic transmission. I assume he gets enough shifting down on the racetrack, in his personal car, he’d rather cruise. 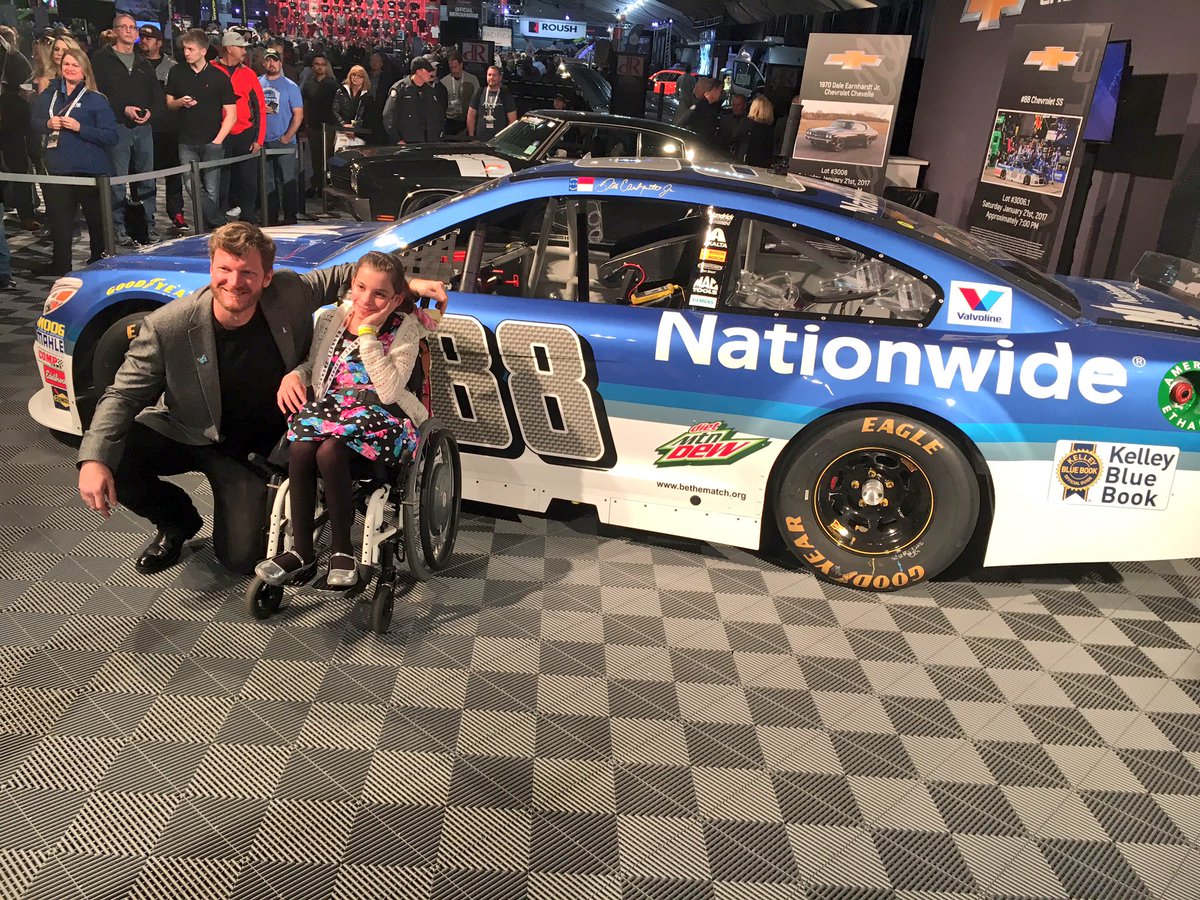 100% of the hammer price of both Dale Earnhardt Jr cars was sent to the Nationwide Children’s Hospital.

The hospital is a leading pediatric care facility and research institute. Nationwide Children’s helps kids everywhere. They provides lifesaving research and care in Cancer, NICU, The Heart Center, Muscular Dystrophy and all of their nationally ranked clinical programs.