Monster Energy windshield logo placement in NASCAR Cup Series. This is a new change for the upcoming 2017 racing season. Stewart-Haas Racing was one of the few teams that released 2017 cars, with the new NASCAR windshield update on paint scheme releases, thus far.

Since 2013, NASCAR drivers’ names have been displayed across the top of the cup car windshield. That changes with the new title sponsor. It will now display the Monster Energy logo. The NASCAR Cup Series drivers’ names will be moved to the rear windshield, same as the Xfinity Series and NASCAR Camping World Truck Series. 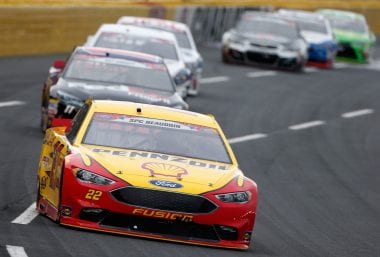 The Coca-Cola 600 is the only race that displayed anything except the drivers names in 2016. In recent years, for that single event, the windshield was used to honor military members who lost their lives fighting for our countries  freedom. The Coca-Cola 600 race is hosted at Charlotte Motor Speedway during Memorial Day weekend. At this time, it’s unsure if that will continue in 2017.

RELATED: Monster Energy plans to bring The Party to NASCAR

In the 2016 NASCAR Chase, now known as the NASCAR playoff’s, driver names were replaced with twitter handles. That change only applied to championship contenders, chase drivers. That was an online campaign used by NASCAR to generate talk on the social media network about the NASCAR Chase.

RELATED: Twitter handles to replace driver names in The Chase 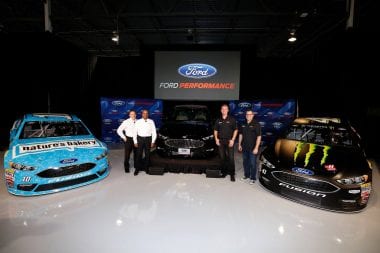 For 2017, NASCAR Cup Series cars will feature a black stripe across their front windshield. The Monster Energy windshield decal will most-likely become a green windshield stripe for NASCAR playoff rounds. The NASCAR racecar windshield screen will no longer display driver names or their twitter handles. Now it will display the new series sponsor, Monster Energy.

On most the 2017 NASCAR Racecars we’ve seen so far a driver name has been used. The Stewart-Haas Racing 2017 cars were one of the first teams to display the updated NASCAR windshields. Hendrick Motorsports, for example, listed driver names on the windshield of every 2017 paint scheme release thus far.

Stewart-Hass was one of very few Cup team to release their 2017 NASCAR paint schemes with the updated NASCAR Monster Energy windshield. Instead of the driver names, it highlights sponsor Monster Energy. Stewart-Haas Racing driver Kurt Busch shares the same primary sponsor as the NASCAR Cup Series, Monster Energy. The team likely had inside info from their sponsor about the direction they were pushing NASCAR to go with the windshields. Their cars were released before this rule change announcement.

The NASCAR windshield logo change is a small change. Especially, in comparison to what we’ve already seen this week. On Jan 23rd, Brian France announced the biggest change to NASCAR, in the history of NASCAR. While we don’t think that change will boost excitement levels at all tracks, it will make NASCAR racing more exciting at many.

This is another one of those changes fans likely won’t like. A big complaint about NASCAR is it’s commercialization. However, when you’re spending millions of dollars on a series sponsorship I think a bit of branding is justified.

NEXT POST
Dodge NASCAR Return in 2018 – If they Really Wanted, says Yates