(Mar 2) – iRacing.com today announced plans to add Volusia Speedway Park to its catalog of nearly 100 laser-scanned digital race tracks.  Together with Eldora and Williams Grove speedways, the Florida half-mile will be included in the popular online motorsports service’s introduction of its new dirt racing feature later this year.

Known as “The World’s Fastest Half-Mile,” Volusia Speedway Park is located in Barberville, FL.  Since opening in 1968 the track has hosted a variety of national racing series.  The track made the switch from pavement to dirt in the 1990s and hasn’t looked back since.  Race fans around the world know it as host to the season kickoff DIRTcar Nationals each February. 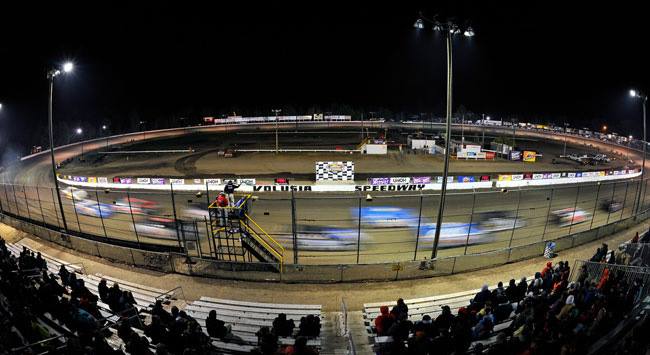 He continued, “Volusia Speedway Park is famous for some of the fastest dirt track racing to be found, and I’m sure iRacers everywhere will enjoy the challenge of racing here.”

“Volusia Speedway Park will be a great addition to our lineup,” says Steve Myers, Executive Vice President and Executive Producer for iRacing.com.

He explained, “The fact that great racers like Donny Schatz, Brad Sweet, Shane Clanton, Brandon Sheppard and others keep coming back to race every year tells you all you need to know about Volusia Speedway Park’s place in American racing.”