Fresh from the hospital, Scott Bloomquist started up front, fended off Josh Richards and a handful of others in route to victory. In the end, Scott Bloomquist picked up his first 2017 LOLMDS win. He tops the 2017 East Bay Raceway Park Winternationals results sheet, giving Team Zero the win.

East Bay Raceway Park was 3 and 4 wide racing action, yet again. However, this time the track lost some of it’s energy toward the final 10 laps of the event. it was still a fantastic show, highlighting two late model champions battling for the win. 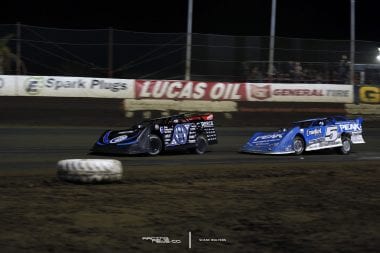 Early, it was Don O’Neal racing to take the lead from Bloomquist. He’d lost it after starting on pole and wanted it back.

At the same time “The New Deal” Hudson O’Neal was challenging the #5 for 2nd. A slide job pushed Hudson out of the groove, he lost several positions and never recovered.

As this was going on, Josh Richards was climbing through the field. Around lap 20, he was as far back as 9th. Around that point, he switched gears and started rolling forward.

Josh Richard went to the high side and drove around the field. Mostly with the power down on the outside. It didn’t take long, he soon reached the front of the pack. He even took the lead from Bloomquist, for a brief moment.

The two late model champions were aggressive but clean. They never touched, but they came close. it was side by side racing action for the lead in front of a packed house at in Tampa, Florida. 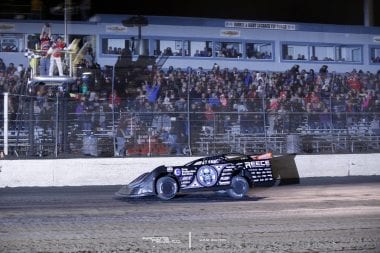 The last 10 laps, the track went away. The high side lost a bulk of it’s momentum. If a driver slipped out of the groove, it looked like a transition from dirt, to ice.

That forced the field into a single lane in the final 10 laps. Scott Bloomquist and Josh Richards ran nose to tail around the bottom, until reaching the checkered flag.

It was a big night for Scott Bloomquist. After a rough start to the beginning of his 2017 title chase, the 0 machine is now moving in the right direction. The win tonight at East Bay Raceway Park provides him with much needed points as he now begins the chase of points leader.

Scott Bloomquist is thankful, “We have a bunch of help this weekend that Randy brought down for us. It takes a more people to get this done than it used to.” 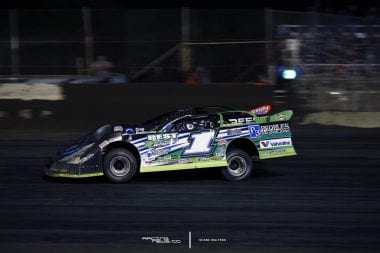 Josh Richards talks about the race, “If the cautions didn’t come out we may have gotten him [Bloomquist]. Once the cautions came out there at the end I just had to protect the bottom.”

He continued, “I ventured up the track in three and four that one lap and I figured I had better get back down. We just wanted to salvage second for a good night. We got behind in the heat race, we had a shock issue that messed us up some and I was riding wheelies out there.”