While it’s not the way I would have handled the situation. Who cares? What’s wrong with Kyle Busch being Kyle Busch? He has every right to handle the questions and situation as he chooses. 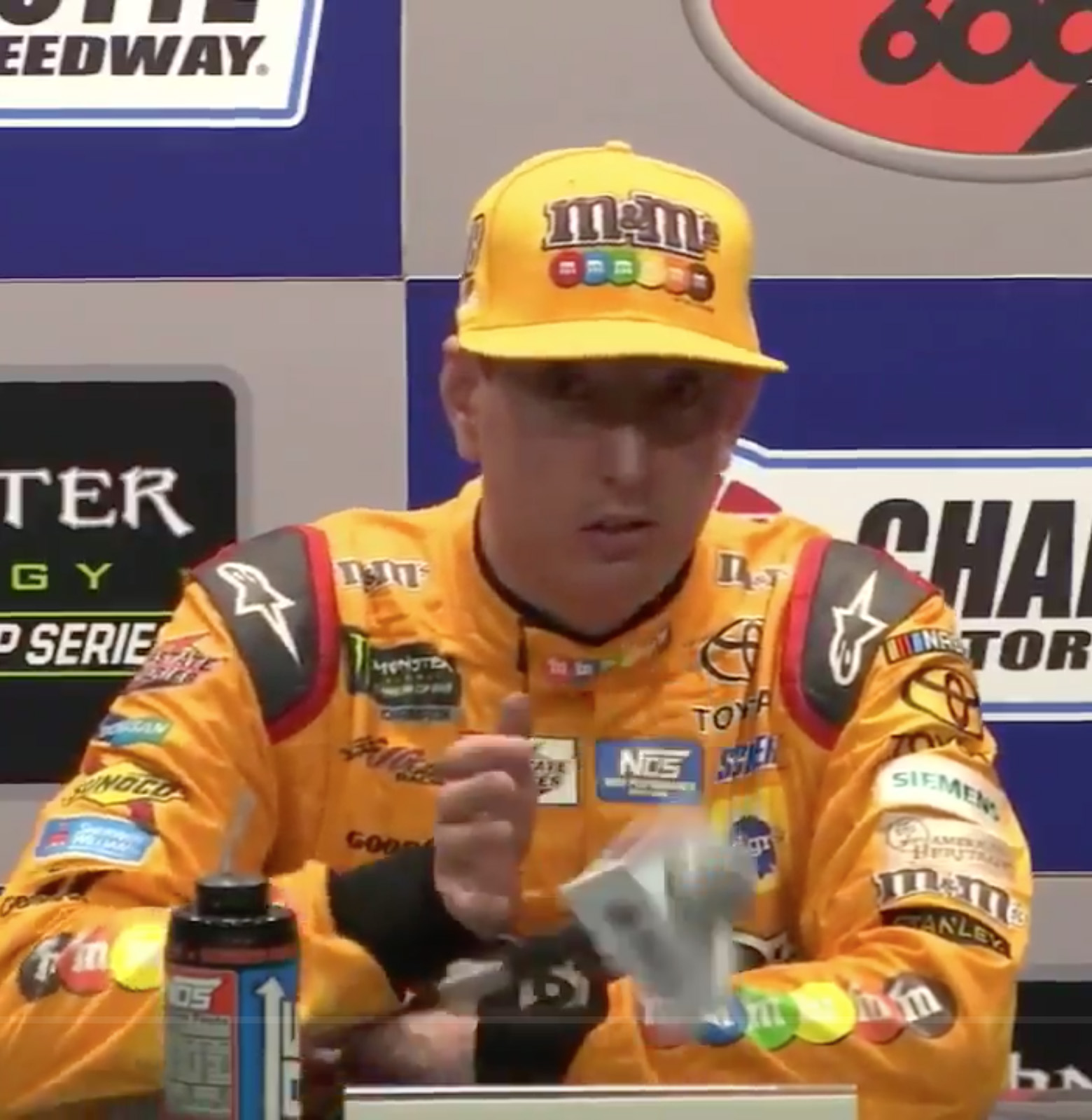 Years ago, Kyle Busch said it best, “I would rather people dislike me for who I am than like me for someone I’m not.”

This weekend was all about honoring military veterans. These are the men and women who directly fought for Kyle Busch’s freedom to say exactly what he wants. Yet, on this same weekend NASCAR fans want him shh’d.

After the race in Charlotte, Kyle Busch was sent to the media center. Catching Kyle Busch after a loss is a recipe for interesting quotes and an explosion of his true personality. Watch the video below as Kyle Busch display’s complete frustration in front of the press.

Using just six words Kyle Busch has set off a firestorm of comments, “I’m not surprised about anything. Congratulations!”

This character is exactly what NASCAR needs. We don’t need boring as shit, commercialized robots. Nobody wants to see or hear from robots. They are annoying. When it comes to Kyle Busch, are you not entertained?

We all can’t be politically correct robots. If you don’t like him that’s perfectly fine, but that shit was funny. I was entertained.

Dale Jr is spot on. If you read the comment section on the video below, you’ll likely find many calling for reprimand from M&M’s, the primary sponsor of Kyle Busch. The people calling for that type of thing are dangerous and need to be eliminated from my field of view.

I start hiding from people when I hear that dangerous statement. A sponsor does not get to dictate a human being’s character. A sponsor also doesn’t have the right to ‘Vanilla-coat’ my sport. Mars Incorporated, the maker of M&M candies, already knows this. After all, they handled the Vegas fight brilliantly.

What I’m saying is… The fans calling for that type of thing are very scary creatures. It’s the equivalent of someone telling the principal that you’re chewing gum in class. This very statement runs parallel to the ‘bad role-model’ argument. Yet, I’m also positive it’s not the job of Kyle Busch or NASCAR to raise your kids.

Personality, is great. Rough edges are perfectly shaped. The over-commercialization of NASCAR has turned many away from the sport. Years ago, Kyle Busch might have been fined for this very thing. So far in 2017, he’s spoken negatively about Goodyear, at least 3 times. In the past, those very complaints would have netted a fine. In fact, not too many years previous, similar comments on Goodyear did net a fine.

However, the times have changed and NASCAR is making smarter decisions. Specifically, Jill Gregory is the person urging NASCAR drivers to show true personality and not issuing fines when they do. As the NASCAR Marketing Director, part of her job description is as follows: Lead consumer marketing efforts to deepen engagement with the core and casual fan, re-ignite relationships with lapsed fans and attract new fans in priority segments.

You know it’s not just one big pool of drivers that are exactly the same.

In September 2016 she stated, “Fans want to see drivers that are competitive on the racetrack that have, that passion and that fire. You see this coming to the surface during the Chase timeframe in particular.”

She continued, “Getting behind the scenes and having that way to interact with the drivers and understand why they do what they do. And that they’re different. You know it’s not just one big pool of drivers that are exactly the same. Each one of the has kinda their own individual traits or reason why they got here, or motivation. The more we can pull that out the better we’re going to appeal to fans regardless of age, gender or whatever group they’re in.”

She’s brilliant. You can hate Kyle Busch all you want. That’s fine, Everything’s Great! But at least we’re talking about him. Once upon a time, NASCAR was water-cooler conversation. Nobody has anything interesting to chat about around the water-cooler when robots are the one’s putting on the show.

UPDATE: A week later, Kyle Busch reflects on the interview shown below