McCreadie had an upgraded modified ready for the SuperDirtWeek finale; Unfortunately, he won’t get a chance to race it

McCreadie ran a modified all week in Oswego Speedway; Planned to race PA Motor Speedway on Saturday then head back to Oswego for Sunday – The plans have changed

On Friday night, the first night of the two-day Lucas Oil Late Model Dirt Series show got underway. Pittsburgh’s Pennsylvania Motor Speedway is hosting the Pittsburgher 100 paying $20,000 to the winner.

Tim McCreadie is a LOLMDS regular. He currently sits 5th in the standings. However, he was not in PA for the first night of the show which featured qualifying and heat races.

Instead, McCreadie was taking part in another big show. He was running a Big Block Modified at Oswego Speedway in Oswego, NY. What show? It’s the NAPA Auto Parts Super DIRT Week XLVII. A week long program that features a finale on Sunday.

McCreadie finished 7th in his main event of the Triple 30 Qualifiers. 71 cars were split into three main events. That would have put him in the main event for Sunday. 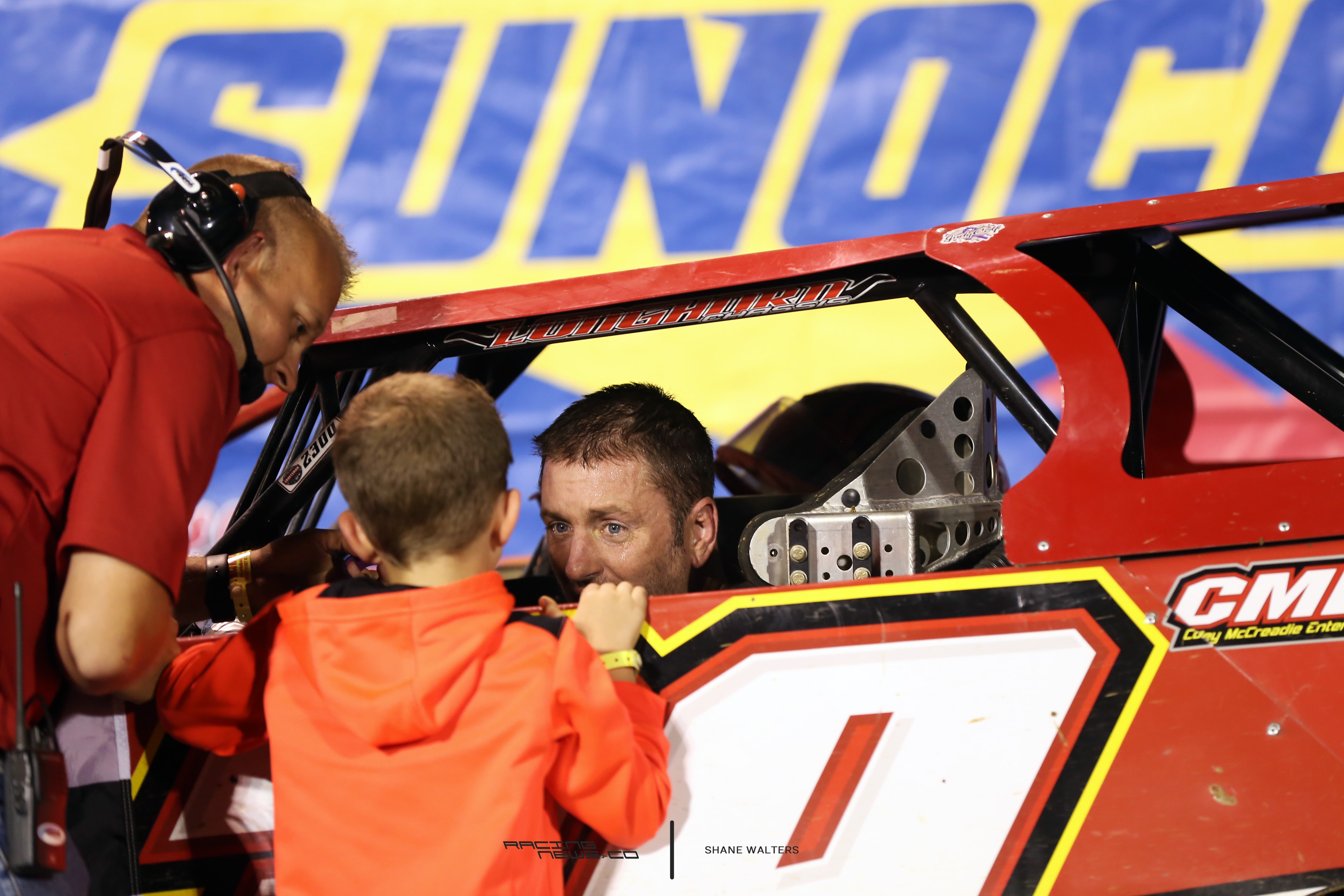 How did your nights go in the modified?

“It was ok. We really were not as good as the last couple times we’ve went up there. I thought we were going to make it better. We changed a whole bunch of stuff, like suspension wise,” Tim McCreadie explained to RacingNews.co .

“I lot of different things happen suspension and setup wise from the beginning of the year to now. It’s not that I’m behind. But, it’s hard for me to switch when I only run 6 races a year.”

Technical or setup wise? Which has advanced more? Or both together?

“Just whole designs. Like rear end designs. It’s crazy how much things have changed in about a year and a half stretch. Different links and coils versus bar cars. And fuel cell locations.”

“Guys are have really just changed. Certain stuff works good at certain places. Then, it doesn’t work good in others.”

“Knowing what to do or how to do it. That’s the hard part. The only way you know is to race. Besides the four races in Florida, I’ve run two or three more since. That’s only six or seven races.”

“We haven’t been able to even try the new stuff. Or even know what to do if we had it. Well, the problem is, we got beat by a lot of it.”

“So, we’re doing all that. But, I don’t know if I’m even going to be able to run,” McCreadie said with a shrug.

The final night of the show was scheduled for Sunday. Following the changes, McCreadie was looking forward to getting back.

Aside from teleportation, there’s no possible way for McCreadie to run both races on Sunday. Instead, he’ll stay in Pennsylvania to race the Lucas Oil Late Model show. McCreadie will start in the B Main of the Pittsburgher 100.

Is that your modified?

“It’s a Sweeteners car. Me and Vic, it’s basically my car, yeah. Vic Coffey used to race. The last couple years, his son’s been racing. We have the ability to haul two cars.”

“I live up there. So, I took one of the cars with Vic on Tuesday. It’s a weird deal. We took one car that has all the new stuff on there, that’s the one his son races. Then, we took my car and it rained all day Thursday. We never got on the track. We just couldn’t possibly see — I was going to drive both of them and decide which one was better.”

“On Friday, we went to qualify. We had to go with what we thought our best shot was, which was the car we’ve always been running.”

“Vic drove one of the cars up there. I drove the other. I’m suppose to drive it home on Sunday.”

In recent months, McCreadie has been using a small 24′ trailer for his dirt late model program. I was confused as to how he would haul two cars. He cleared that up for me. He didn’t use his late model trailer to haul the modified.

The late model came from North Carolina. The modified came from McCreadie’s shop in New York. However, McCreadie as the driver of both race cars still had to get from Oswego, NY to Imperial, PA. He ran the modified on Friday night in New York then was scheduled to run the late model on Saturday night.

How did the logistics of that work?

“It’s a six hour ride, you just drive. We got done at like 9:30 or 10 on Friday. So, I drove until like 1 in the morning. It’s kinda like back in the day with the Outlaws. Some of them races were five and half hours apart. You just drive until you get tire, get up and go again in the morning.”

Related: Tim McCreadie details the lack of consistency early in 2018

Tim McCreadie vs Bobby Pierce at I-80 Speedway